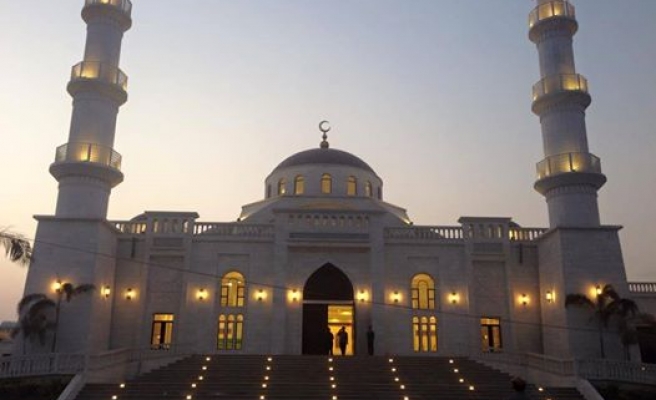 Cambodia’s largest and only Ottoman-style mosque was officially opened by Prime Minister Hun Sen in a ceremony attended by more than 1,000 people in the capital Friday.

Al-Serkal Grand Mosque in Phnom Penh's Boeng Kak neighbourhood was funded by Eisa Bin Nasser Bin Abdullatif Alserkal, an Emirati businessman, and replaces a mosque that once sat on the same site before it was torn down in 2012.

Ahmad Yahya, president of the Cambodian Muslim Community Development Organization, described the mosque as “the biggest and most beautiful” of its kind, telling The Anadolu Agency that its construction has been an important bookmark in the story of the Muslim community in Cambodia.

“For the whole country, when they travel to Phnom Penh and from overseas, they come to this mosque to pray, and for tourists who come to Cambodia, they would like to come and pray,” he said.

The gleaming $2 million structure was a big draw Friday as hundreds of people milled around outside. The separate men’s and women’s prayer halls were packed.

Yahya said Hun Sen told the crowd he is proud of Cambodia’s Muslims, who are referred to as Cham and who were targeted by the ultra-Maoist Khmer Rouge regime in the 1970s.

“He said Muslims in Cambodia don’t have any problems; there’s no fighting with each other, no discrimination such as what we see between Shia and Sunni Muslims in other countries… but he is very proud of the Muslims in Cambodia, same for the Buddhists also,” Yahya said.

“They don’t interfere with one another, and in history, we never had a problem.”

Referring to the mosque’s Ottoman design and soaring minarets, Yahya said it was proving to be a hit with devotees because “it cost a lot of money and it’s very attractive to Muslim people in Cambodia.”

He said Alserkal chose to donate the mosque to Cambodia because the businessman had come to Cambodia as a private citizen after the restive 1970s and had also done some business.

“He wants people to enjoy praying in it,” Yahya said.

After the ceremony Friday, the usually quiet Boeng Kak neighborhood -- which is better known for having had its lake filled in and thousands of people evicted to make way for a development project -- was abuzz with life. Cham Muslim men, women and children ate and shopped at several ad-hoc stalls that sprang up selling clothes and jewelry.

Speaking to AA as he made his way to the mosque for prayers, Malaysian visitor and former expat Az Har said he was lifted by Hun Sen’s speech.

“He [Hun Sen] said that Muslims in other countries can learn from Muslims in Cambodia,” Har said, adding that the mosque “looks like it’s from Turkey.”

He said he had provided a private donation of a cow to be slaughtered in honor of the inauguration.