The seven who made it ashore yelled in jubilation over a satellite phone after their landing and sang Chinese patriotic songs. 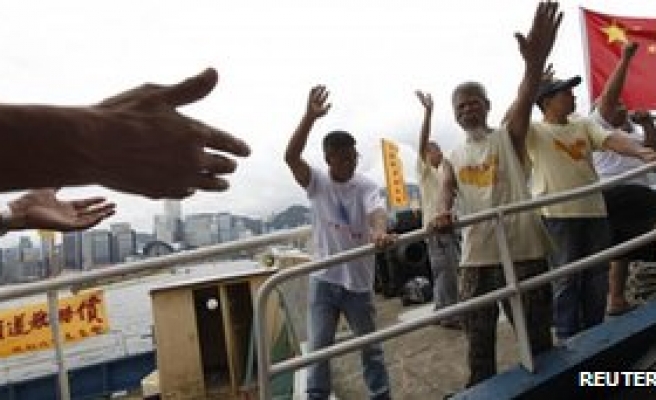 A group of Chinese activists landed on an island chain disputed with Japan on Wednesday, staking their claim of sovereignty despite warnings from the Japanese coastguard in a move bound to infuriate Tokyo.

The Hong Kong fishing vessel, carrying around a dozen activists from Hong Kong, Macau and China, was closely tailed by around a dozen Japanese coastguard vessels and pummelled with water cannon, but activists still managed to break through.

The seven who made it ashore yelled in jubilation over a satellite phone after their landing and sang Chinese patriotic songs.

The fate of the activists isn't yet known. A Japanese Foreign Ministry spokesman said: "We will take appropriate action including law enforcement." He didn't elaborate.

The uninhabited islands in the East China Sea, known as Senkaku in Japan and Diaoyu in China, are in resource-rich waters around 180 km east of Taiwan's Keelung port.

They have long been the centre of maritime territorial disputes between China and its neighbours, all of which cite historical and other claims over fishing areas and potentially rich gas deposits.

Tension between Japan and its neighbours was already high on Wednesday, the 67th anniversary of the end of World War Two, as South Korea and China both told Tokyo to do much more to resolve lingering bitterness over its past military aggression.

Despite close economic ties in one of the world's wealthiest regions, memories of Japan's wartime occupation of much of China and colonisation of South Korea run deep in the two countries.

The last time Chinese activists landed on the isles was in 2004 during the tenure of former premierJunichiro Koizumi, and Japan deported them without a trial.

In 2010, however, Japan detained a Chinese captain after his fishing vessel collided with a Japanese patrol boat.

Chan Miu-tak, a spokesman for the Action Committee for Defending the Diaoyu Islands, said the Hong Kong-registered boat was closely tailed by over 10 Japan coast guard vessels as it neared the disputed islands and was sprayed by water cannon.

China issued a statement earlier saying it was paying close attention and demanding Japan not do anything to endanger the activists.

A small group of activists in Beijing also staged a demonstration outside the Japanese embassy, brandishing banners asserting China's sovereignty over the isles.