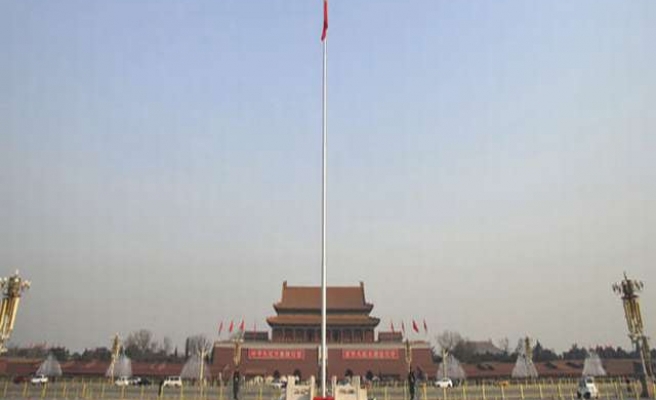 China defended the bloody 1989 crackdown on pro-democracy demonstrators around Beijing's Tiananmen Square on Tuesday, the eve of the 25th anniversary, saying it had chosen the correct path for the sake of the people.

For the ruling Communist Party, the 1989 demonstrations that clogged Tiananmen Square in Beijing and spread to other cities remain taboo after the government termed the protests "counter-revolutionary".

The anniversary of the date on which troops shot their way into central Beijing in 1989 has never been publicly marked in mainland China, though every year there are commemorations in Hong Kong, which returned to Chinese rule in 1997, as well as in self-ruled Taiwan, which China claims as its own.

"The Chinese government long ago reached a conclusion about the political turmoil at the end of the 1980s," Foreign Ministry spokesman Hong Lei told a daily news briefing.

"In the last three decades and more of reform and opening up, China's enormous achievements in social and economic development have received worldwide attention. The building of democracy and the rule of law have continued to be perfected," he said.

"It can be said that the road to socialism with Chinese characteristics which we follow today accords with China's national condition and the basic interests of the vast majority of China's people, which is the aspiration of all China's people."

The foreign ministry is typically the only government department which will regularly answer questions from foreign reporters, especially on sensitive topics.

The run-up to the anniversary has been marked by detentions, increased security in Beijing and tighter controls on the Internet, including disruption of Google services.

Hong would not comment on why Google was being targeted, saying only that the government "manages the Internet in accordance with the law".

SPOKESMAN: NO DISSIDENTS, ONLY LAW BREAKERS

Hong said China had no such thing as dissidents.

"In China there are only law breakers -- there are no so-called dissidents."

Hong also would not comment on the reported detention in Beijing over the weekend of Chinese-born Australian artist Guo Jian, a former Chinese soldier who last week gave an interview to the Financial Times about the crackdown.

"I don't understand the details of the situation, but I want to point out that the relevant departments of the Chinese government consistently act in accordance with the law," he said.

The Australian Department of Foreign Affairs and Trade said in a statement that their embassy in Beijing was in contact with the Chinese government about Guo's case and was requesting access to him.

"Initial advice from Chinese authorities is that Mr Guo was detained on a visa-related matter. When consular officials have the opportunity to visit Mr Guo, they will seek to confirm the nature of his detention, check on his welfare and extend to him all appropriate consular assistance," it said.

"We hope that this consular visit will take place in coming days," the department said, adding that Australian Foreign Minister Julie Bishop has said that the government will do what it can to secure his release.