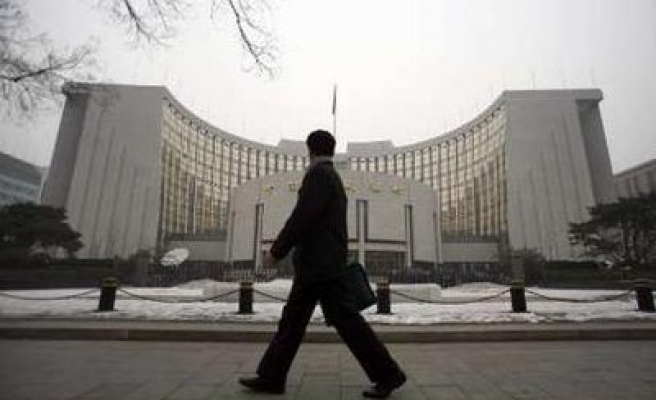 The move gives commercial banks the freedom to compete for borrowers, a reform the People's Bank of China said on Friday will help lower financial costs for companies. Previously, the lending floor was 70 percent of the benchmark lending rate.

However, the PBOC, in a statement, left a ceiling on deposit rates unchanged at 110 percent of benchmark rates, avoiding for now what many economists see as the most important step Beijing needs to take to free up interest rates.

The latest step underscores Beijing's resolve to start fixing distortions in its financial system and the economy more broadly as it tries to shift from export- and investment-led growth to more consumption-led activity.

Some analysts said cheaper credit could help support the economy, which has seen year-on-year growth fall in nine of the last 10 quarters.

"This is a big breakthrough in financial reforms," said Wang Jun, senior economist at China Centre for International Economic Exchanges, a prominent government think-tank in Beijing.

"Previously, people had thought the central bank would only gradually lower the floor on lending rates. Now they scrapped the floor once and for all."

The Australian dollar rose modestly on the news on hopes cheaper credit will lead to more demand from Australia's biggest export market.

The announcement provided some support to weak stock markets in Europe and a timely reminder to the world's top financial leaders meeting in Moscow of China's intention to rebalance its economy.

The United States welcomed the move, saying China promised to let markets play a bigger role in allocating credit during the U.S.-China Strategic and Economic Dialogue in Washington last week.

"This is a welcome further step in the reform and liberalization of China's financial system," Holly Shulman, a spokeswoman for the U.S. Treasury, said in an email.

But many economists say such a push is necessary so that lenders learn to better price risk, which will force them to allocate capital more efficiently and so help rebalance an economy saddled with overinvestment and overcapacity in sectors from cement to steel making to solar panels.

Scrapping the lending floor will likely cut borrowing costs for businesses and individuals, ending what many observers say had been artificially high rates that benefited state lenders at the expense of private enterprise.

Some economists were sceptical at how much direct economic impact the move would have because few banks have fully utilised the limited freedom they already had to charge interest rates slightly below benchmark rates, choosing instead to keep their rates slightly above the floor that has been in place.

"So the move may have more of a signalling effect than transmit immediately to the economy but it is an important signalling effect," said Manik Narain, emerging market strategist at UBS in London.

However, to the extent that it does lead banks to lower their lending rates, the move could serve to stimulate investment at a time when the world's second-largest economy is running around its lowest growth rates since 2009, having logged 7.5 percent growth in the second quarter.

More important, though, is the sign that policymakers are getting serious about tackling challenging reforms, just four months after Premier Li Keqiang took office, analysts said.

"This is one of the biggest steps they could have taken," said Mark Williams, chief Asia economist at Capital Economics. "It tells you something about the trajectory."

The need for financial reforms was put on full display in late June, when the central bank attempted to choke off funds flowing to "shadow banking" activities, leading to a crunch in the country's money markets that sent short-term borrowing rates to levels normally seen only during financial crises, prompting jitters among investors around the world.

The shadow banking sector, or non-bank lending, has ballooned in recent years, raising concerns that authorities are losing track of potential bad debts building in the economy.

The central bank said it is also scrapping controls on rates on discounted bills, a common form of payment among companies.

The PBOC made clear in its statement it does not intend to ease up on its controls over mortgage rates. Beijing has been clamping down on the property sector for several years to try to keep a lid on rising prices and speculative buying.

It said it planned to free up deposit rates eventually but now was not the right time. It said it still needed to do more groundwork, which is expected to include launching a deposit insurance system, something many observers expect may happen this year.

"(Reform of deposit rates) is more difficult and more sensitive. We should not expect it to happen very soon," said Yu Yongding, former member of the central bank's monetary policy committee and a researcher at the Chinese Academy Of Social Sciences in Beijing.

Beijing worries that allowing banks to raise deposit rates to compete for funds could crush some smaller lenders and force them to go bust.

Longer term, the latest move could signal that the government will step up other reforms seen as necessary to help rebalance the economy.

"This underlines that China is moving to a fully convertible currency and floating exchange rates," said Flemming Nielsen, senior analyst at Danske Bank in Copenhagen. "Their next step will be to widen the daily trading band for RMB (yuan). They should do that within the next three months."