The sentence means Gu Kailai is likely to face life in jail for murdering British businessman Neil Heywood last year, provided she does not commit offences in the next two years. 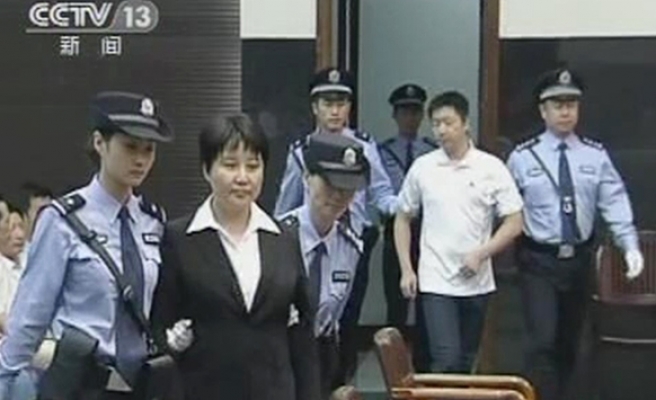 A Chinese court sentenced the wife of disgraced Politburo member Bo Xilai to death on Monday but suspended her execution, ending one chapter in a scandal that has shaken the ruling Communist Party ahead of a leadership transition later this year.

The sentence means Gu Kailai is likely to face life in jail for murdering British businessman Neil Heywood last year, provided she does not commit offences in the next two years.

"The verdict is just and reflects a special respect toward the law, reality and life," Gu said of the sentence, according to a spokesman for the court, Tang Yigan.

"The court determined that Bogu Kailai is guilty of murder and sentenced her to death with a two year reprieve, with her political rights revoked for the remainder of her life," Tang told reporters after the hearing in the eastern city of Hefei, referring to Gu by her formal name.

At a trial on Aug. 9, Gu admitted to poisoning Heywood in November, and alleged that a business dispute between them led him to threaten her son, Bo Guagua, according to official accounts published by state media.

The spokesman Tang said the court had concluded that Heywood made threatening words against Bo Guagua, but had never acted on those words. The court also found that Gu's actions reflected a "psychological impairment", which he did not specify.

The court also said Zhang Xiaojun, an aide to the Bo household, was sentenced to nine years in prison for acting as an accomplice to the poisoning of Heywood.

"Neil Heywood indeed threatened Bo XX through words, exacerbating the conflict, but there was no evidence confirming that he took harmful actions against Bo XX," said Tang, referring obliquely to Bo Guagua.

"Therefore the argument of the defendants of Bogu Kailai and Zhang Xiaojun does not stand and the court rejected the argument."

Gu's sentencing could be a prelude to formal punishment of Bo Xilai, a brashly ambitious politician under investigation for alleged violations of party discipline -- an accusation that covers corruption, abuse of power and other misdeeds. After the party leadership decides on those allegations, Bo Xilai could also face criminal charges related to the murder case.

Bo's hopes for securing a spot in China's next top leadership unravelled after his former police chief, Wang Lijun, fled to a U.S. consulate in early February for about 24 hours and exposed the murder allegations.

Britain's embassy in China said in an e-mailed statement that it welcomed the "fact that the Chinese authorities have investigated the death of Neil Heywood and tried those they identified as responsible".

It added that Britain had "consistently made clear to the Chinese authorities that we wanted to see the trials in this case conform to international human rights standards and for the death penalty not to be applied".

Bo, the son of a revolutionary, ran the southwestern city of Chongqing where Heywood was killed. Bo was seen as competing for a place in the Politburo Standing Committee, the body at the pinnacle of power in China, at a once-in-a-decade leadership transition later this year.

His downfall has stirred more division than that of any other leader for over two decades. To leftist supporters, Bo was a charismatic rallying figure for efforts to reimpose party control over dizzying, unequal market-led growth.

But he made powerful enemies among those who saw him as an opportunist who wanted to impose his policies on the country.

Bo was sacked as Chongqing boss in March and Gu was publicly accused of the murder in April, when Bo was suspended from the Politburo, a 25-member elite council that ranks below the Standing Committee. He has yet to be expelled from that council.

Four Chinese policemen have also admitted to charges that they sought to protect Gu from investigation -- a development that could also prove dangerous for Bo.

Police sources in Chongqing have said Bo tried to shut down the investigation into his wife after being told she was a suspect. Bo has not been seen in public since March, when he gave a combative defence of his policies and family at a news conference during China's annual parliament session.