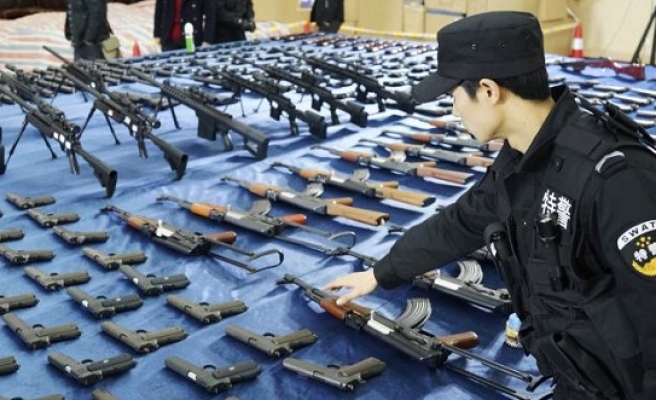 China rose from sixth to third place in a list of the world’s leading arms suppliers, increasing its export of weapons by 88 percent between 2010 and 2015, according to a report on the global arms trade by the Stockholm International Peace Research Institute.

“China continues to expand its military capabilities with imported and domestically produced weapons,” Siemon Wezeman, a senior researcher at the institute, said.

The U.S. and Russia retained their positions at the top of the table, with the U.S. accounting for 33 percent of international arms exports and Russia making up 25 percent. China’s share of the market was 5.9 percent.

“As regional conflicts and tensions continue to mount, the U.S.A. remains the leading global arms supplier by a significant margin,” Aude Fleurant, the institute’s director of military expenditure, said. “The U.S.A. has sold or donated major arms to at least 96 states in the past five years and the U.S. arms industry has large outstanding export orders, including for a total of 611 F-35 combat aircraft to nine states.”

Overall, the global volume of arms sales rose by 14 percent between 2006-10 and 2011-15, with India, Saudi Arabia, China, the United Arab Emirates and Australia making up the top-five importers.

Turkey was the world’s sixth largest weapons importer, increasing its share of arms imports from 2.5 percent of the import market to 3.4 percent. Nearly two-thirds of its arms were purchased from the U.S., followed by South Korea and Spain.

The Asia-Pacific region accounted for 46 percent of global imports, followed by the Middle East on 25 percent.