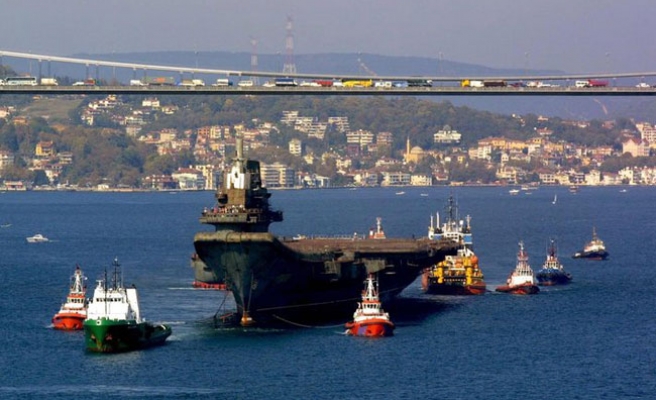 China launched its first aircraft carrier for a maiden run on Wednesday, a step likely to boost patriotic pride at home and jitters abroad about Beijing's naval ambitions.

The long-awaited debut of the vessel, a refitted former Soviet craft, marked a step forward in China's long-term plan to build a carrier force that can project power into the Asian region, where seas are spanned by busy shipping lanes and thorny territorial disputes.

"Its symbolic significance outweighs its practical significance," said Ni Lexiong, an expert on Chinese maritime policy at the Shanghai University of Political Science and Law.

"We're already a maritime power, and so we need an appropriate force, whether that's aircraft carriers or battleships, just like the United States or the British empire did," he said in a telephone interview.

The carrier "left its shipyard in Dalian Port in northeast Liaoning province on Wednesday morning to start its first sea trial," said the official Xinhua news agency, describing the trip as a tentative test run for the unfinished ship.

The aircraft carrier, which is about 300 metres (984 feet) long, ploughed through fog and sounded its horn three times as it left the dock, Xinhua said on its military news microblog.

Xinhua said that "building a strong navy that is commensurate with China's rising status is a necessary step and an inevitable choice for the country to safeguard its increasingly globalised national interests".

Chinese citizens said the carrier launch showed their country deserved more respect from the rest of the world, despite problems it faces at home.

"An aircraft carrier is the mark of major powers," Pan Chunli, a 29-year-old IT technician in Beijing told Reuters.

"China has grown dramatically. The whole world should take a fresh look at China, viewing it as a rising power that it has the ability to defend its rights and territory."

Retired Chinese navy Rear Admiral Yin Zhuo told state-run television that his country intended to build an air carrier group, but the task would be long and difficult.

"As for forming a carrier group, I think that will take at least ten years," he told a Chinese television broadcast on the carrier launch.

Last month, China was refitting the old, unfinished Soviet vessel bought from Ukraine's government, and sources told Reuters it was also building two of its own carriers.

"China has had a longstanding fascination with the national prestige attached to aircraft carriers, and this first sea trial may be seen as a crucial step towards the goal of achieving great naval power status," said Chengxin Pan, an expert on China at Deakin University in Australia

"But for many neighbours, it may symbolise something different and more unsettling. It is inevitable that neighbouring countries will react with some alarm, especially given recent disputes in the South China Sea as well as the maritime incident between China and Japan last year," he said.

If Beijing is serious about having a viable carrier strike group, however, it will need three carriers, Ashley Townshend at the Lowy Institute for International Policy in Sydney told Reuters in an interview before the debut of the vessel.

China would also have to develop support ships and aircraft for any carrier group, Townshend said, noting it would take some 10 years to develop a viable carrier strike group.

"The Philippines should not be concerned with this development. An aircraft carrier is an offensive tool but I don't think China has the intention to use it to bully its neighbours," the former chief of the Philippines' navy, retired Admiral Ferdinand Golez, told Reuters.

Before the launch, a Pentagon spokesman played down the likelihood of any immediate leaps from China's carrier programme.

But that is just one part of China's naval modernisation drive, which has forged ahead while other powers tighten their military budgets to cope with debt woes.

China has been building new submarines, surface ships and anti-ship ballistic missiles as part of its naval modernisation.

The country's growing reach at sea is triggering regional jitters that have fed into long-standing territorial disputes, and could speed up military expansion across Asia.

In the past year, China has had run-ins at sea with Japan, Vietnam and the Philippines. The incidents -- boat crashes and charges of territorial incursions -- have been minor, but the diplomatic reaction often heated.

"Overall, the perception of a rapidly rising and potentially threatening China is likely to be reinforced and Beijing will face enormous challenges in dispelling such a perception," said Pan, the lecturer at Deakin University.

Last week, Japan warned that China's naval forces were likely to increase activities around its waters.

"This is showing that China is in the process of acquiring capability to control South China Sea as well as East China Sea," said Yoshihiko Yamada, a professor at Japan's Tokai University about the carrier trial.

China's defence budget has shot up nearly 70 percent over five years, while Japan, struggling with public debt, has cut military outlays by 3 percent over the same period, a Japanese government report said.

"A single, solitary aircraft carrier floating on the sea, without the accompanying forces, doesn't constitute a battle force," said Ni, the Shanghai professor.

"It would be a sitting duck if you tried to send it out."