China is lobbying neighbours to sign up to a road map for renewed nuclear disarmament talks with North Korea, whose leader Kim is apparently visiting China. 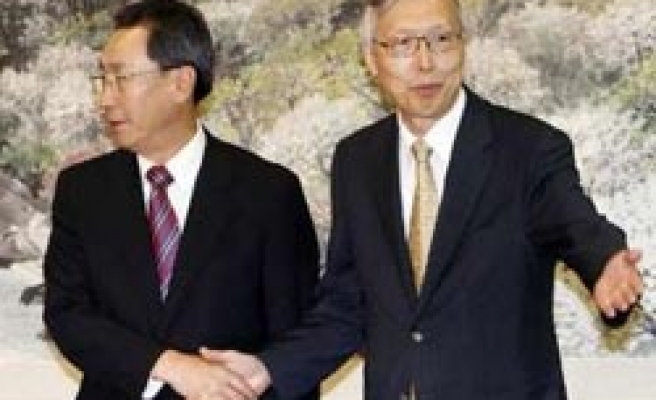 China is lobbying neighbours to sign up to a road map for renewed nuclear disarmament talks with North Korea, whose leader Kim Jong-il is apparently visiting China amid conciliatory words and threats of atomic "holy war".

The details of Beijing's plan for restarting stalled six-party nuclear talks came from a South Korean diplomatic source, who spoke on Saturday after discussion in Seoul with Wu Dawei, China's top envoy in the talks.

But the source, as well as a Japanese official speaking in Beijing, stressed that big obstacles remained in the way of new talks, even if the secretive Kim's reported trip to China yields another vow of North Korea's willingness to sit down and discuss a dormant deal to scrap its nuclear weapons in return for aid.

"We don't want to restart six-party talks for the sake of talks," the South Korean diplomatic source said.

China's regional lobbying, and courting of the reclusive Kim, highlight the pressures that North Korea -- isolated, poor and with a brace of primitive nuclear bombs -- has brought to bear on northeast Asia, home to the world's second and third biggest economies and a big U.S. military presence.

There have been no conclusive sightings in China of the 68-year-old Kim, who has appeared frail and gaunt since reportedly suffering a stroke in 2008. But motorcades of black cars and extensive security in Changchun, a northeast Chinese city, indicate he may be there, after entering China on Thursday.

The two neighbours do not disclose much information about Kim's travels, and only do so after he has left for home.

On Friday, a North Korean diplomat brandished the possibility of nuclear war with South Korea and the United States.

"If Washington and Seoul try to create conflict on the Korean peninsula we respond with a holy war on the basis of our nuclear deterrent forces", North Korea's ambassador to Cuba, Kwon Sung-chol, said in Havana, according to a report from there by China's official Xinhua news agency.

China's envoy, Wu Dawei, proposed a three-stage process to restart the multilateral talks aimed at coaxing Pyongyang to give up its nuclear weapons in return for aid and other assurances, the South Korean diplomatic source told Reuters.

In meetings in Seoul, Wu said North Korea and the United States should first hold bilateral talks that could open the way to the broader, six-party negotiations, the source said.

Those six countries - the United States, North Korea, South Korea, Japan, Russia and China - would then hold a preparatory meeting to lay the way for fresh full-fledged negotiations.

South Korea and Washington say resuming the talks will be impossible until Pyongyang also faces up to their conclusion that it was behind the sinking of a South Korean navy ship, the Cheonan, in March, an incident in which Pyongyang denied it was responsible.