Engineers battled to drain an unstable lake, threatening new misery for a devastated northwestern China town if it bursts its banks. 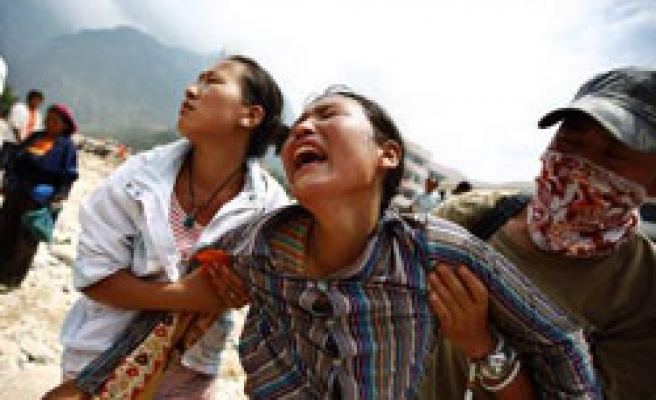 Engineers battled on Tuesday to drain an unstable lake created by China's deadliest landslide in decades, fearing it could burst and swamp devastated areas where people are still hunting for survivors.

At least 702 people died in northwestern Gansu province when a tsunami of mud and rocks engulfed swathes of the small town of Zhouqu at the weekend, and another 1,042 are missing, an emergency relief official, Tian Baozhong, told reporters there.

On Monday, authorities put the official toll of dead at 337.

Despite slim chances, grief-stricken locals kept waiting and weeping beside buried and destroyed homes where relatives and friends were entombed, hoping at least to find the remains of loved ones.

"My niece is buried under there. She is a high school student, such a good girl," said weeping 42-year-old Yin Linfeng, who survived the landslide because she had been away.

"She was buried in the rubble when she was looking after my house...I will not give up. I want to see her body if she is dead. It was all my fault."

A 52 year-old Tibetan man was pulled from a collapsed apartment on Tuesday morning, only the second person found alive since Sunday in a town buried in sludge up to seven metres deep in places.

Search efforts under a blazing sun and the pain of finding only corpses were also taking a toll on survivors, medics said.

"There are..people who have spent several days looking for their family members without any food or water. Some of them suffered from hypoglycaemia, some fainted, some had a heat stroke," said military doctor Wang Puxuan, treating them.

The landslide was the worst to hit China in six decades, state media said, and the most deadly single incident in a year of heavy flooding that had already killed nearly 1,500.

There is no sign of a let-up in the onslaught, with tropical storm "Dianmu" heading for northern China, and expected to bring strong rains as far away as the landslide area.

Fearing new downpours after days of sunshine that eased rescue work, local officials focused on preventing a catastrophic overflow of the brimming new lake in the centre of Zhouqu.

With basic food and water needs on their way to being met, officials, spurred on by Premier Wen Jiabao's instructions to tackle the problem as soon as possible, are increasingly focused on the loose dam thrown down by the landslide.

Water levels behind the barrier fell slightly after controlled explosions created a channel to funnel some off, and on Tuesday occasional blasts echoed around Zhouqu.

"This massive landslide disaster left a 10-metre high blockage in the Bailong river, creating a barrier lake, and flooding north and south Binhe road," the local government said in a report on the "disaster zone" released late on Monday.

Thousands of people have already been evacuated from villages downstream as a precaution, as the surge of mud and floodwaters would be almost impossible to escape.