China says still no compensation from Vietnam for riot victims

Fighting between Vietnamese and Chinese workers broke out in central Ha Tinh province, killing at least four people and wounding at least 100 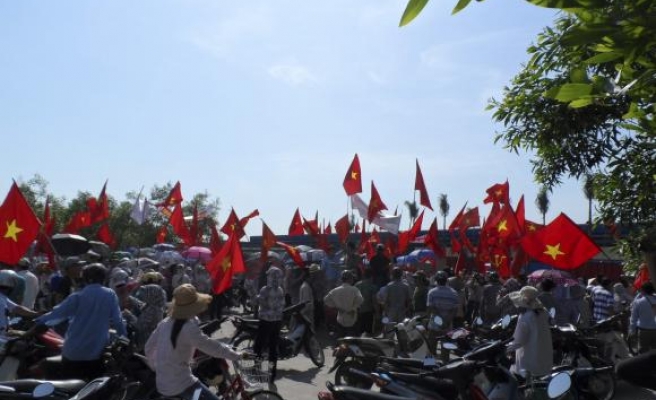 China said on Friday it had received no compensation from Vietnam for losses inflicted by anti-Chinese riots in Vietnam last month, demanding that Hanoi pay up and punish assailants responsible for the widespread damage.

A flare-up in strained ties over disputed sovereignty in the South China Sea sparked last month's protests after China towed an oil rig to an area claimed by both sides. The issue triggered a rampage of arson, destruction and looting of Chinese-owned factories and businesses mistaken for being Chinese.

China has repeatedly pressed Vietnam to compensate its citizens and companies.

"As of today, Vietnam has not provided any compensation at all," Chinese Foreign Ministry spokesman Hong Lei told a daily news briefing.

"We demand that Vietnam take earnest steps to guarantee the safety of Chinese bodies and personnel in Vietnam, severely punish the assailants who created the disturbances and fully compensate the losses of Chinese companies and individuals."

Chinese state energy firm CNOOC deployed dozens of ships in towing the $1 billion oil rig to a spot 240 km (150 miles) off Vietnam's coast. Vietnam and China traded accusations last week over the sinking of a Vietnamese fishing boat not far from where the oil rig was parked.

China claims about 90 percent of the South China Sea, displaying its reach on official maps with a so-called nine-dash line that stretches deep into the maritime heart of Southeast Asia. The Philippines, Vietnam, Malaysia, Brunei and Taiwan also have claims to parts of the potentially energy-rich waters.

Philippine President Benigno Aquino accused China on Thursday of pursuing an "expansion agenda". He said Manila had evidence that Chinese ships were circling two disputed reefs, weeks after Manila accused China of reclaiming land in another part of the South China Sea.

Hong dismissed the president's comments and restated China's position that it had "irrefutable sovereignty" over the Spratly Islands, one of the disputed groups of largely uninhabited islands in the South China Seas, and neighbouring waters.

"Anything China does on any of these islands is within the scope of China's sovereignty and has nothing to do with the Philipppines," he said.