China says to crack down on 'illegal' Uighur religious activities

China blamed Muslim pro-independence elements for deadly unrest in Uighur region, which it announced a crackdown on "illegal" religious activities at the start of the Muslim fasting month. 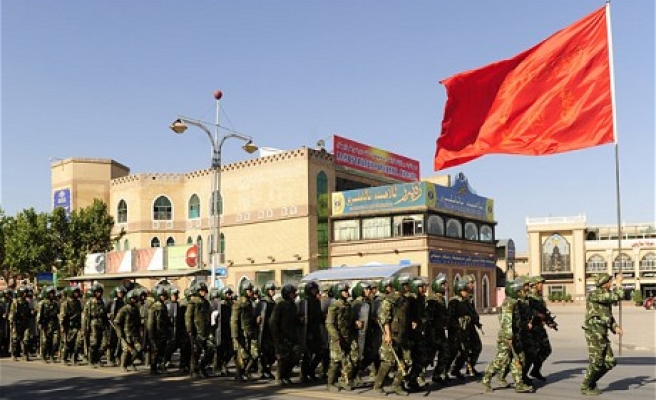 China on Monday blamed Muslim pro-independence elements for deadly unrest in Uighur region, which it announced a crackdown on "illegal" religious activities at the start of the Muslim fasting month.

The attack in Kashgar city on Sunday afternoon was the latest violence to rattle the region where Muslim Uighurs have long resented the presence of Han Chinese and religious and political controls imposed by Beijing.

It came less than 24 hours after two small blasts hit the city, which is dominated by Uighurs.

"The malign intention behind this violent terror was to sabotage inter-ethnic unity and harm social stability, provoking ethnic hatred and creating ethnic conflict," the Kashgar government said on its website (www.xjks.gov.cn).

Captured suspects confessed that their ringleaders had earlier fled to Pakistan and joined the separatist "East Turkestan Islamic Movement", and received training in making firearms and explosives before infiltrating back into China, the Kashgar government said.

Police shot dead five people and arrested four others after they stormed a restaurant, set in on fire after killing the owner and a waiter, and then ran onto the street and hacked to death four people, Xinhua news agency reported.

The Chinese-language Global Times newspaper said all the suspected attackers were Uighur.

Beijing has been wary of contagion from uprisings across the Arab world inspiring challenges to Party power in China.

"I think it's a testament to how tense the region remains, and the fact that you have increased polarisation between ethnic groups," said Nicholas Bequelin, a researcher on China for Human Rights Watch, a New York-based advocacy group.

"There's a lot of pent-up anger and resentment of Chinese policies in Kashgar," added Bequelin, noting a controversial programme to raze homes in traditional Uighur neighbourhoods and relocate them to housing under firmer official control.

The top Communist Party official in Uighur region, Zhang Chunxian, announced a crackdown on religious "extremism" and vowed harsh punishment for those found guilty of attacks, according to the region's official news website (www.tianshannet.com).

Bequelin, the human rights researcher, said he was skeptical about Chinese suggestions that the "East Turkestan Islamic Movement" (ETIM) was behind the attack.

"It's now an umbrella term used by China for any kind of Uighur separatist or anti-state activity," Bequelin said of ETIM.

Earlier on Sunday, Chinese media reported that two men wielding knives attacked a truck driver and then a crowd of people following two explosions in Kashgar on Saturday night, leaving eight people dead including one of the attackers.

Eighteen people including 14 "rioters" were killed in an attack on a police station in Xinjiang on July 18, according to the government.