Relatives of the near 1,300 still missing trekked into the disaster zone to look for their loved ones. 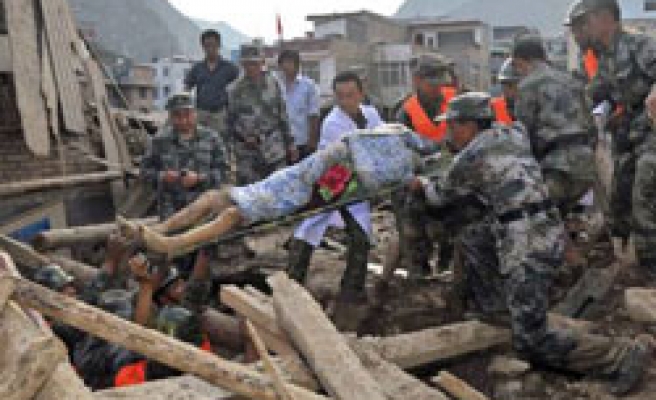 Chinese rescuers armed with little more than shovels and hoes on Monday hunted for survivors of a huge mudslide, as relatives of the near 1,300 still missing trekked into the disaster zone to look for their loved ones.

Engineers were also blasting a barrier of rocks and mud in an effort to drain an unstable lake that formed upstream from the town of 40,000 residents in northwest China after a torrential downpour triggered landslides that choked up the Bailong River and killed at least 127 people.

With more rains forecast for this week, there may be fresh disaster if the unsecured natural dam bursts, although thousands of people downstream have already been evacuated as a precaution.

A torrent of sludge and floodwater swept through Zhouqu county, in a remote corner of Gansu province, on Saturday night, engulfing homes and leaving little hope of finding survivors.

But the muddy road into the county seat, blocked to most vehicles, was filled with a stream of people walking in, hoping to find missing relatives
Nearly 90 people have been injured, and at least 30 critically ill people are in intensive care in hospital.

Torrential rains and flooding across swathes of China this year had killed 1,454 people before the Zhouqu landslide, by far the worst single incident. Another 669 people were missing, and 12 million were forced to flee their homes, the ministry of civil affairs said in a statement on its website.

Xie Yonggui, whose daughter was studying English in Zhouqu town, was called on Sunday by a relative who worked nearby and who told him of the disaster.

"I don't know where she is. Her phone has had no signal since the landslide," said the farmer, who set out from his mountain village early the next morning to look for her.

As many as one or two hundred people were making the difficult and possibly dangerous trek, a witness said.

The mass of mud and rocks buried at least 300 low-rise homes, state media reported, while images showed multi-storey concrete buildings toppled or with chunks gouged out.

In the town, vital supplies are running low.

"The communication vehicles came yesterday, so we can make phone calls again. But right now, we are extremely short of water and food because all the roads are blocked because of the landslides," said Cui Longbing, a 40-year-old resident who works with the Zhouqu Jinlong Construction Company.

"There is only one grocery store open right now...A lot of people are crying, and you see corpses on the ground. Only hospitals and flood control headquarter have water and electricity right now. We really need water and food here."

Premier Wen Jiabao visited the disaster-hit town on Sunday, to survey the wreckage, promise government help, console survivors, and urge rescuers and engineers to work as hard as possible to save lives and prevent further tragedy.

China has deployed the resources of its powerful central government to battle a string of natural disasters in recent years -- flooding, quakes and landslides -- winning popular support for both the military and leadership.

Experts said the landslide, which carried mud and rubble over five kilometres (three miles), could have been caused by earth made vulnerable to heavy rain by a recent drought and the 2008 Sichuan earthquake that may have loosened the mountainside.