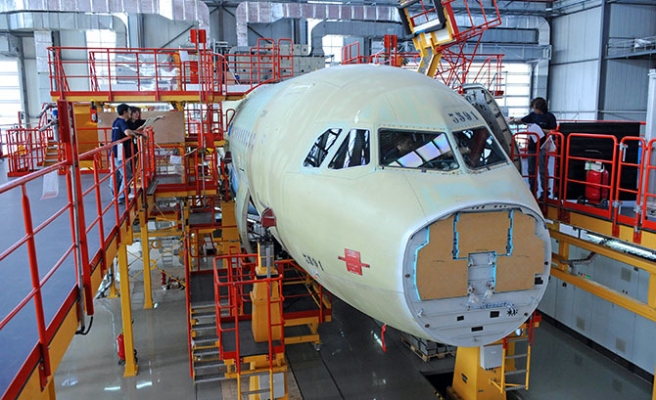 Merkel's trip comes between a high profile visit to Britain by Chinese President Xi Jinping earlier this month, when he stayed at Buckingham Palace in London, and ahead of a trip to China by French President Francois Hollande next week.

China is the European Union's largest trading partner and several major EU countries including Germany, Britain and France are wooing the country in the hope of winning business and becoming hubs for the growing overseas trade of China's yuan currency.

The competition has made for awkward moments between the countries and their ally the US, China's greatest geopolitical rival, including their decisions to join Beijing's Asian Infrastructure Investment Bank despite Washington's opposition.

Observers question whether the increased investment comes at the cost of softening stances against human rights abuses by the Asian giant, which has used political access as a cudgel to punish countries that criticise its behaviour.

Airbus and state-owned China Aviation Supplies Holding Group signed a deal for 100 A320 aircraft, a spokesman for the manufacturer told AFP, worth $9.7 billion at list prices.

They also confirmed 30 options for twin-aisle A330s, which were among a 75-plane deal announced in June ahead of a visit by Li to Airbus headquarters in the French city of Toulouse, the spokesman said.

Airbus -- which has an assembly facility in the northern Chinese port of Tianjin -- is engaged in a fierce struggle with the US' Boeing for dominance in the crucial Chinese market.

During Chinese President Xi Jinping's visit to the US last month, Seattle-based Boeing announced a record purchase of 300 aircraft worth around $38 billion.

China is expected to add 6,330 new aircraft worth $950 billion to its commercial fleet by 2034, Boeing said in August in its annual China Current Market Outlook.

Merkel's visit comes in the middle of a whirl of diplomatic activity involving China, and she said she was "very happy" to know that Xi had paid such a fruitful visit to Britain, stating: "We welcome competition that is conducive to the promotion of business."

"In Germany, we don't have a Queen," she added, to laughter.

On Friday, the German leader will go with Li to his home province of Anhui, where she will visit a village and a school, echoing President Xi Jinping's escorting of Indian Prime Minister Narendra Modi to his ancestral province of Shaanxi when he visited in May.

"This is the first time since I’ve become Premier that I’ve accompanied a foreign leader outside Beijing," Li said.

It "clearly indicates" the good relations between the two leaders and their countries, he added, which have continued despite Merkel's sometimes tough language on China's human rights record.

Merkel has raised the issue publicly on past trips, while Britain has largely shied away from the subject after a meeting with exiled Tibetan spiritual leader the Dalai Lama was met with a high-level Chinese freezeout.

Other deals signed in the leaders' presence included cooperation between mobile phone manufacturer Nokia and China Mobile, as well as Chinese bank ICBC and embattled car giant Volkswagen, which has previously been heavily fined for violating Chinese anti-trust laws.

The company, which has come under fire for faking fuel efficiency results, signed a cooperation deal for the Industrial and Commercial Bank of China to provide it "comprehensive" banking services and support "in China and within a global scope," according to a statement published on the website of the automakers' China venture.

Chinese growth is slowing, with expansion falling to its lowest level since the global financial crisis in the third quarter, but Merkel said she continues to "have confidence in the Chinese economy," adding that economic development undergoes "waves and changes".

Li said: "China's industry development level lags behind that of Germany. We need to learn advanced concepts and technology from Germany."

Many EU firms complain Beijing restricts market access to sectors where Chinese firms in Europe are free to operate and tensions remain over market access and alleged Chinese "dumping" of products such as steel.