Chinese New Year is marked by riotous displays of fireworks thought to bring good luck but which turn cities into a semblance of war zones and blacken the skies with thick smoke for hours on end. 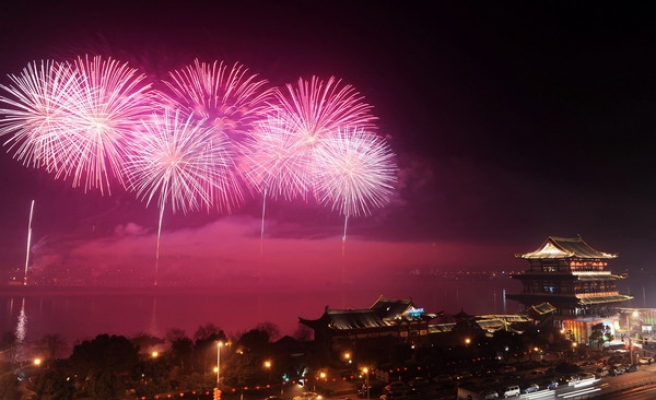 Warnings of heavy smog over central and eastern China this week have prompted the country's weather forecaster to call for a ban on the fireworks traditionally let off at Lunar New Year, state media said on Wednesday.

Chinese New Year, which begins on Friday, is marked by riotous displays of fireworks thought to bring good luck, but which turn cities into a semblance of war zones and blacken the skies with thick smoke for hours on end.

"Firecrackers and fireworks can release large amounts of toxic gas and particles such as sulphur dioxide, which will cause severe air pollution," Chen was quoted as saying.

Authorities, including those in Beijing, have asked people to set off fewer fireworks this year to help improve air quality, though in the capital at least there have been no moves to close down the temporary stalls that sell the fireworks.

Sales of fireworks have been flat so far in Beijing, the China Daily said, as people heed the calls for clearer skies.

"We have reduced the number of fireworks in the city by roughly 13 percent this year and we are not confident all our fireworks in stock will be sold," Wu Liyu, head of the Beijing Fireworks Co, told the paper.

Air quality in cities increasingly worries China's stability-obsessed leaders, anxious to damp potential unrest as more affluent citizens turn against a growth-at-all-costs economic model that has poisoned much of the country's air, water and soil.

Large parts of eastern China, including the prosperous and cosmopolitan commercial capital ofShanghai, have suffered thick palls of smog this winter, though Beijing has had fewer problems this year.