The signal equipment was designed by a research and design institute in Beijing, Xinhua said, but it did not disclose the full name of the institute. 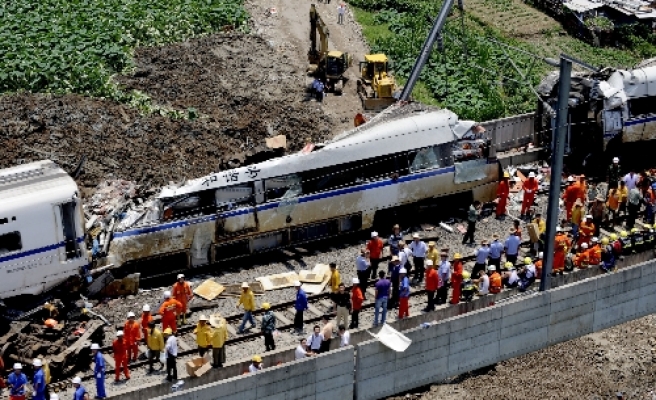 A deadly train crash in eastern China on the weekend was caused by a "severe flaw" in the design of signaling equipment, the official Xinhua news agency reported on Thursday, citing the Shanghai Railway Bureau.

A high-speed train rammed into another stalled train near the city of Wenzhou in Zhejiang province late on Saturday, the report said, because a signal should have turned red after a lighting strike, but it was mistakenly still green, Xinhua said.

Xinhua cited Shanghai Railway Bureau head An Lusheng as saying that railway staff at the Wenzhou station did not respond correctly after the signalling system failed.

The signal equipment was designed by a research and design institute in Beijing, Xinhua said, but it did not disclose the full name of the institute. The equipment had been in operation since September 2009.

Premier Wen Jiabao has ordered an investigation into the crash and pledged the government would take "resolute" safety steps in its aftermath.

Wen arrived in Wenzhou on Thursday morning to mourn the victims, express condolences to the relatives of the victims, and visit the scene of the accident.

Public anger has boiled up over the crash in online postings and in at least one organised protest.

On Wednesday, more than 100 relatives of passengers who were killed protested outside a railway station, angered by the lack of accountability over the incident, state media reported.

The Global Times, a tabloid owned by Communist Party mouthpiece the People's Daily, said the protesters demanded direct talks with officials from the Railways Ministry.

"They claimed that the bullet trains were built with advanced technology. How could lightning paralyze them so easily?" the newspaper quoted Wang Hui, whose husband died in the accident, as saying.

"Help us and tell us what really happened," the paper quoted the protesters, who gathered outside the station near the accident site in Wenzhou in Zheijiang province, as saying.

The newspaper showed photographs on its website of dozens of people with some holding a banner that said: "Disclose the true reason behind the July 23 train crash and respect the dignity of victims."

Efforts by the propaganda department to bar Chinese media from questioning official accounts of the accident fuelled the anger and suspicion, especially about the death toll and rescue efforts.

The Railway Ministry is still investigating the cause of the accident, and has ordered a two-month safety review of railway operations.

State media has said the lightning strike knocked out power which in turn knocked out an electronic safety system designed to alert conductors about stalled locomotives on the line.