China calls the Dalai Lama a "wolf in sheep's clothing" who seeks to use violent methods to establish an independent Tibet. The Dalai Lama, who fled to India after a failed uprising in 1959, maintains he only wants genuine autonomy for Tibet and denies advocating violence. 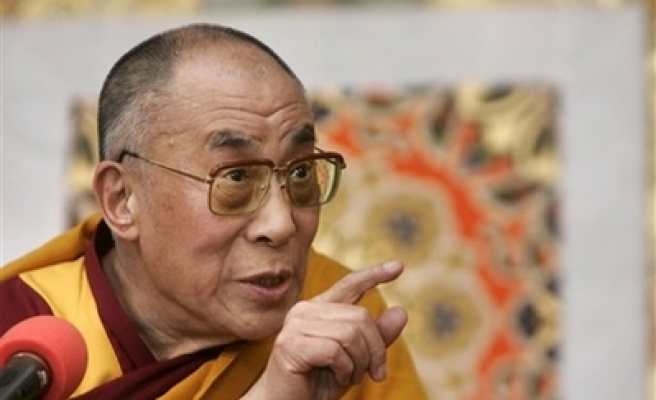 China urged the United States on Friday to scrap plans for President Barack Obama to meet exiled Tibetan spiritual leader the Dalai Lama later in the day, warning it would "seriously damage" ties between the two countries.

The White House National Security Council said Obama would meet the Dalai Lama, a Nobel Peace Prize laureate, at the White House on Friday in a show of concern about China's human rights practices.

China calls the Dalai Lama a "wolf in sheep's clothing" who seeks to use violent methods to establish an independent Tibet. The Dalai Lama, who fled to India after a failed uprising in 1959, maintains he only wants genuine autonomy for Tibet and denies advocating violence.

"The United States' arrangement for its leader to meet the Dalai would be a gross interference in China's internal affairs and is a serious violation of the norms of international relations," Chinese Foreign Ministry spokeswoman Hua Chunying said in a statement.

"It will seriously damage Sino-U.S. relations. We urge the United States to take seriously China's concerns, immediately cancel plans for the U.S. leader to meet the Dalai, do not facilitate and provide a platform for Dalai's anti-China separatist activities in the United States," she added.

The announcement comes at a delicate time for Sino-U.S. relations. The United States has expressed concern about China's increasingly assertive behaviour in the East China Sea and South China Sea and Obama's U.S. strategic pivot, or rebalancing, toward Asia, is seen as a reaction to the growing clout of China.

At the same time, both countries are increasingly inter-dependent and have to cooperate on international issues such as Iran and North Korea. China is also the United States' biggest foreign creditor. As of July 31, China held $1.28 trillion in U.S. Treasury bonds, according to Treasury Department data.

A senior Chinese official vowed this week to ignore foreign pressure on human rights, and said foreign leaders who meet the Dalai Lama should "pay a price" for it.

Diplomats in Beijing have told Reuters Obama and Chinese President Xi Jinping are expected to meet at a nuclear security summit in the Netherlands next month.

When asked whether China would cancel the meeting, Hua later said at a daily news briefing: "If any country deliberately insists on harming China's interests, in the end, it will also damage its own interests and will harm the bilateral relations between China and the relevant country."

"(If) the U.S. president wishes to meet any person, it's his own affair, but he cannot meet the Dalai," she said. "The Dalai is definitely not a pure religious figure. He is using the cloak of religion to engage in long-term activities to separate China, he is a political exile."

But previous meetings between Obama and the Dalai Lama have not had serious repercussions.

In 2011, after the last meeting between the two, China responded with predictably vehement words but stopped short of threatening retaliation, indicating that Beijing was keen to avoid tensions between the world's biggest economies.

"I think China will send a strong message of protest publicly and privately, trying to warn President Obama to not go too far, because we still have a major, new relationship to build," said Sun Zhe, director of the Center for U.S.-China Relations at Beijing's elite Tsinghua University.

Xi has stressed repeatedly that China wants to build "a new brand of relations between major powers", based on principles of non-conflict, non-confrontation, mutual respect and cooperation.

Friday's meeting between Obama and the Dalai Lama comes less than a week after U.S. Secretary of State John Kerry visited China. It is unclear whether he had briefed China in advance about the planned meeting.

In what appeared to be a small concession to the Chinese, Obama will see the Dalai Lama in the White House Map Room, a historically important room but of less significance than the Oval Office, the president's inner sanctum.

The United States recognizes Tibet as part of China and does not support Tibetan independence, but supports the Dalai Lama's approach for more autonomy, said Caitlin Hayden, a spokeswoman for the White House National Security Council.

"We are concerned about continuing tensions and the deteriorating human rights situation in Tibetan areas of China," Hayden said.

In Tibetan regions of China, including four provinces outside Tibet, more than 120 Tibetans have set themselves on fire since 2009 in protest against Chinese rule. Most have died.

The White House views the Dalai Lama as "an internationally respected religious and cultural leader" and noted Obama had met him twice before, in February 2010 and July 2011.

"We will continue to urge the Chinese government to resume dialogue with the Dalai Lama or his representatives, without preconditions, as a means to reduce tensions," Hayden said in a statement announcing the 10 a.m.(1500 GMT) meeting.

The Dalai Lama was in Washington on Thursday, meeting the American Enterprise Institute, a conservative organization. In a speech there, he did not address the issue of Tibet, but stressed that there was a general need for "compassion, tolerance and forgiveness" in the world.

Communist Chinese troops took control of Tibet in 1950. China says it "peacefully liberated" the remote region that it says was mired in poverty, exploitation and economic stagnation.

Exiles and rights groups say China tramples on the religious, cultural and linguistic rights of Tibetans and enforces its rule using brutal methods.