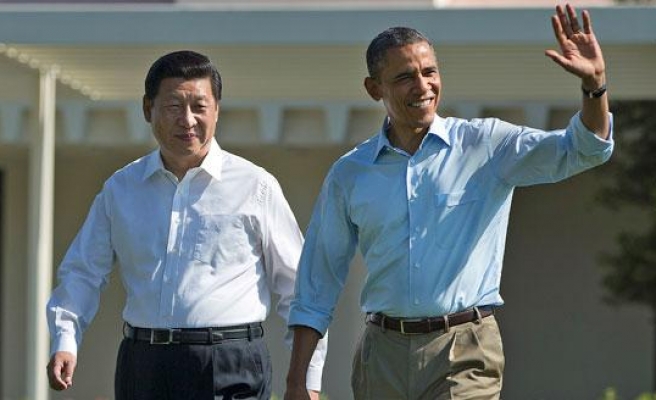 Chinese President Xi Jinping and U.S. President Barack Obama's key national security aide hinted at tensions that divide their countries on Friday ahead of a state visit to Washington by Xi.

Meeting in Beijing with U.S. national security adviser Susan Rice, Xi said that he looks forward to continuing a dialogue with Obama next month and working to ensure that China-U.S. relations keep expanding.

"China attaches great importance to the growth of the China-U.S. relationship," Xi said.

"We stand ready to further promote our practical cooperation, effectively manage the sensitive issues between us and strengthen the friendship between the people of both countries."

Rice responded that Xi's visit to the U.S. will provide a "great opportunity" for the two countries "to strengthen and deepen our relationship" as they seek ways to benefit their peoples as well as the world.

"At the same time, we obviously have issues of difference and some difficulty that we need to work through and we will continue to do so," she said.

Xi's visit to the U.S. comes as the countries have shown a willingness to cooperate on global matters ranging securing a nuclear deal with Iran to climate change.

But they have also clashed over issues including what Washington and some regional countries see as China's increasing assertiveness in Asia as well as its territorial disputes with countries close to the U.S. such as the Philippines and Japan.

The tone of Rice's talks with other Chinese officials earlier Friday was similar to her encounter with Xi, highlighting areas of cooperation while recognising differences.

Yang said China and the U.S. will stay in close communication on subjects including "the Iran and North Korean nuclear issues" and climate change, along with questions of "regional rights and interests".

That could refer to the South China Sea and East China Sea, where Beijing is embroiled in territorial disputes with its Southeast Asian neighbours and U.S. treaty ally Japan respectively.

The U.S. and China, both permanent members of the United Nations Security Council, participated in negotiations that secured a landmark nuclear deal with Iran last month.

Beijing and Washington have also worked together as members of the six-party talks on North Korea's nuclear programme, which also take in Tokyo, Seoul, Moscow and Pyongyang.

That forum has been essentially dormant for years though China, which serves as host, supports its revival.

Rice also met with Fan Changlong, a vice chairman of the Communist Party's powerful Central Military Commission, which is chaired by Xi.

The US envoy said Washington was "deeply committed to building a healthy, stable, reliable military-to-military relationship with China" and stressed an agreement last year to "reduce the risk of unintended consequences" in encounters.

China claims virtually the entire South China Sea and has recently carried out major land reclamation in the area that analysts say will extend its military reach with the construction of bases and runways.

Beijing says the efforts have no aggressive intent and are meant to largely foster maritime safety in the waters, a major global trade artery which Washington says it is committed to keeping open to unhindered navigation.

Rice's visit comes as China prepares to hold a massive military parade next week to commemorate victory over Japan in World War II, though the U.S., as well as major Western countries, will not be sending top officials to participate.