China's likely next premier emerges from shadows in Hong Kong

Vice Premier Li Keqiang, 56, is midway through a choreographed itinerary that has interspersed encounters with ordinary people with meetings with the city's official and business elite. 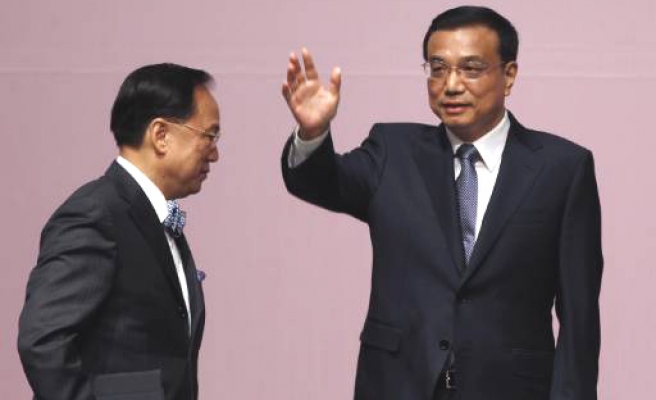 Bearing gifts for the people of Hong Kong, the man tipped to be China's next premier is wooing the southern financial boomtown this week in a political warm-up lap to assuming power from popular Premier Wen Jiabao.

Vice Premier Li Keqiang, 56, is midway through a choreographed itinerary that has interspersed encounters with ordinary people with meetings with the city's official and business elite.

One of his first stops was a center for the elderly, where he pressed the flesh and presented a large television set and an electric wheelchair. He was briefed later on the development of affordable housing in a city known for sky high property prices.

He made a few fans along the way, including one who promoted him prematurely.

"Li Keqiang spoke cheerfully and humorously, with no arrogance. He also cares about our living condition. He is a very down-to-earth premier," said Yeung Cho Wai, who hosted Li at his home in a public housing estate.

His gifts for broader Hong Kong, which suffered an economic contraction in the second quarter, included pledges for freer trade, opportunities to play a bigger role in the offshore yuan market and future gas supplies.

Li's rare visit has taken a page from Wen, head of domestic policy as premier for the world's second largest economy, who offered similar incentives on his popular Hong Kong appearances.

As China's economy surged over the past decade, Wen and Communist Party chief and President Hu Jintao sought to burnish reputations as "Men of the People" through routine visits to the countryside and poorer regions. Wen even descended a mine shaft to eat dumplings with miners, and frequently held inspection tours after major disasters.

After nearly a decade in power, Hu and Wen are due to retire from their Party posts in the fall of 2012 and the presidency and premiership in 2013, in a major leadership reshuffle.

It is a busy week for Chinese heirs apparent.

Vice President Xi Jinping, the man expected to take over from Hu as party chief and president, hosts his U.S. counterpart Joe Biden. On top of the usual diplomatic agenda, Biden's trip will provide him a chance to size up the future leader of China.

In Hong Kong, Li has been enjoying his own coming out party of sorts, traveling with an entourage of senior regulators including the central bank chief, and displaying a populist streak that hints at the agenda he will pursue once in power.

His ascent will mark an extraordinary rise for a man who as a youth was sent to toil in the countryside during Mao Zedong's Cultural Revolution and later had quite a liberal political experience while studying at elite Peking University.

He was born in Anhui province in July 1955, the son of a local rural official. Li worked on a commune in Fengyang County -- notoriously poor even for Mao's time and one of the first places to quietly revive private bonuses in farming in the late 1970s. By the time he left, Li was a Communist Party member and secretary of his production brigade.

He was among the first university students to win places in intensely competitive exams revived in 1977, as Deng Xiaoping and other reformers began to shed Mao's radicalism.

Peking University was among the first Chinese schools to restore law teaching after the Cultural Revolution, and Li attached himself to a British-educated professor, Gong Xiangrui, who taught ideas regarded as exotic and liberal at the time. He worked to master English, and co-translated "The Due Process of Law" by Lord Denning, the famed English jurist.

Outside class, Li mixed with radical thinkers and joined an intellectual "salon" that included Wang Juntao, later condemned as a counter-revolutionary "black hand" after the 1989 purge, Wang recounted in a memoir.

In 1980 Li, then in the official student union, endorsed controversial campus elections contested by Hu Ping and other pro-democracy activists, Hu has said. Party conservatives were aghast. But Li, already a prudent political player, stayed out of the controversial vote.

As others peeled off into radical dissent, Li continued climbing the Party hierarchy. In 1983 he joined the Youth League's central secretariat, headed then by Hu Jintao.

Li rose through the Youth League and later served in challenging Party chief posts in Liaoning, a frigid northeastern rustbelt province, and rural Henan province. He was named to the powerful nine-member Party Standing Committee in 2007.

In spite of his liberal past, Li's elevation is unlikely to bring much change on the political front, where reforms would require more unified support for any serious change.

"It will need both Xi and Li Keqiang and prominent leaders to work as a team to push for political reforms," said Li Mingjiang, an expert in Chinese politics at Singapore's Nanyang Technological University.

"If the leadership is divided on the overall orientation of reforms, it will be difficult to see tangible moves or actions."