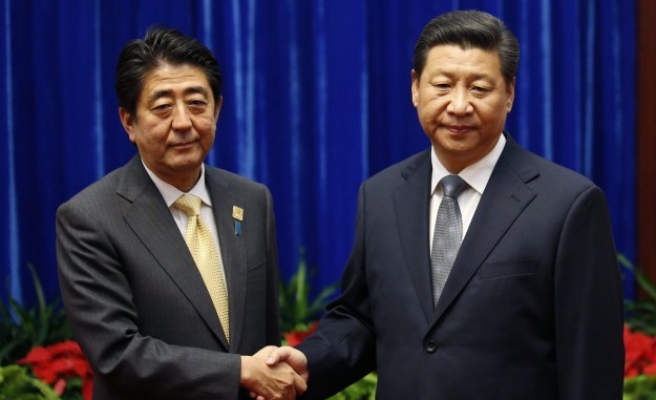 After an awkward handshake, Chinese President Xi Jinping and Japanese Prime Minister Shinzo Abe held formal talks on Monday for the first time since the two leaders took office, a breakthrough in efforts to improve ties between the Asian rivals.

Television footage showed Abe waiting for Xi to greet him at Beijing's Great Hall of the People, a departure from usual protocol in which the Chinese leader is on hand waiting for a guest. Xi was unsmiling and stiff as the two shook hands and he did not speak to Abe when they first met.

China and Japan, the world's second- and third-largest economies, have rowed bitterly in the past two years over disputed islands, regional rivalry and the legacy of Japan's wartime occupation of China.

The meeting, which capped months of backdoor talks and an agreement last week between diplomats that signalled willingness to put the territorial feud on the back burner, opens the door to lower-level dialogue including stalled high-level economic discussions.

"Leaders (from the two nations) met and exchanged views frankly," said Japan's chief cabinet secretary, Yoshihide Suga, in Tokyo. "I think there was big progress in freshly improving the economic and various relationships between Japan and China."

Abe and Xi also agreed to start work on maritime crisis management, to prevent clashes at a time when patrol ships and fighter jets from both countries shadow each other regularly near the disputed islands in the East China Sea that are controlled by Japan but also claimed by Beijing.

Experts have said both sides had agreed the deep freeze in diplomatic ties was harming vital economic relations as well as threatening an unintended military clash that could drag in the United States. Japan's direct investment into China fell more than 40 percent during the first nine months of the year.

"This is a first step towards improving bilateral relations, returning to the core of a mutually beneficial relationship based on common strategic interests," Abe told reporters after what a Japanese official said was a "gentlemenlike" meeting on the sidelines of a gathering of Asia-Pacific Economic Cooperation (APEC) leaders.

Abe played a key role in improving ties with China during his 2006-2007 term, but since taking office again in 2012, his efforts to ease the limits of Japan's pacifist constitution and recast wartime history with a less apologetic tone and China's greater regional assertiveness have deepened friction.

"Xi had to be concerned about how the meeting was covered in China," he said. "Looking like he was meeting his best friend would probably not go down all that well."

But Curtis also said body language aside, the meeting was an "important and positive development" towards repairing ties.

Nevertheless, rebuilding trust will not be easy.

China has sought assurances that Abe would not repeat his December 2013 visit to Tokyo's Yasukuni Shrine for war dead, including wartime leaders convicted as war criminals by an Allied tribunal.

Such a promise would be hard for Abe to make, however, and the Japanese leader said last Friday that last week's agreement did not cover specific issues such as his shrine visits.

Japanese Deputy Chief Cabinet Secretary Katsunubo Kato said there was no direct mention of the disputed isles or the Yasukuni shrine at the talks. Abe has previously said that there had been no change in Japan's stance on the isles.