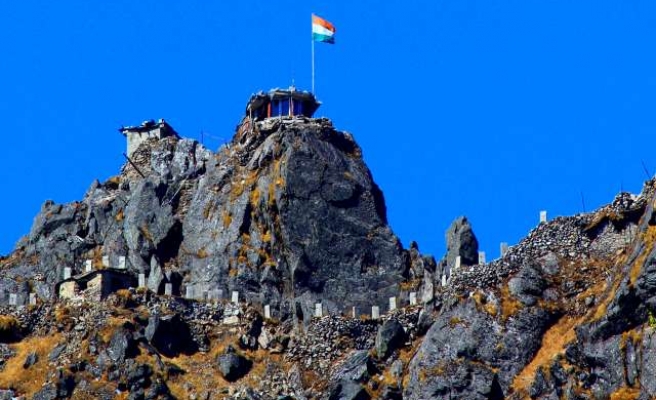 Hundreds of Indian and Chinese troops have dug into positions on a high Himalayan plateau, leading India's army chief to cancel a foreign trip and monitor a standoff that underscores deep differences between the Asian giants as they seek closer ties.

Military officials in New Delhi and Kashmir said on Tuesday that Chinese troops set up a camp about 3 km (2 miles) into territory claimed by India in the Chumar region of the Ladakh plateau more than a week ago.

Indian soldiers have set up their own base nearby and have been told not to back down, the officials said.

Asked about the standoff, China's Ministry of Defence said the two sides' understanding of the line of the border was not the same.

"The two countries' border, to this day, has not been designated," the ministry said in a faxed statement, adding that the Chinese military respected pacts signed by both countries.

"Both sides, if problems occur in the border area, can reach an appropriate resolution through dialogue and consultation."

India has deployed about 1,500 troops in the Chumar area and there are about 800 Chinese soldiers, an Indian government official said. The two sides are not in an eyeball-to-eyeball confrontation and are well separated from each other, he added.

The alleged incursion by Chinese troops into territory claimed by India dominated a visit by Chinese President Xi Jinping last week, overshadowing his pledges to invest $20 billion over five years and a bid to warm personal ties with new Prime Minister Narendra Modi.

After a summit between Modi and Xi on Friday, the soldiers pulled back from a face-to-face confrontation to take up more distant positions.

Military commanders from both sides were due to hold a meeting in the border area on Tuesday, another official said, in a fourth such gathering to try and resolve the dispute.

Modi has promised to take a tougher stance in India's border dispute with China, joining other Asian nations, including Japan and the Philippines, which have pushed back against Beijing.

China must be combat ready to win a "regional war" and the armed forces must make sure they hew to decisions by the central leadership, Chinese President Xi Jinping told senior military leaders, the official Xinhua news agency said on Monday.

Xi's comments were widely reported in Indian media and came days after a speech in New Delhi in which he said China was not a warlike nation.

During Xi's visit Modi urged an early border settlement with China. Both sides have held 17 rounds of border talks since the early 1990s, with little progress.

Small incursions are common across the Line of Actual Control between the nations, the de facto border that runs some 4,000 km (2,500 miles) across the Himalayas, but it is rare for either country to set up camp deep within disputed territory.

"As both sides have increased their forces on the border it has led to more confrontations like this," said Dipankar Banerjee, director of the Institute of Peace and Conflict Studies in New Delhi.

"These sorts of events are par for the course when you have a long undemarcated border."