China's President Xi Jinping has begun his first official visit to India, with a focus on improving trade ties and resolving the decades-old dispute over border areas. 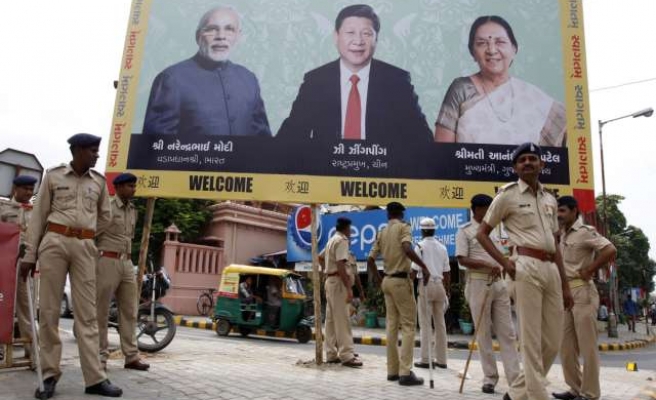 A combination of the "world's factory" and the "world's back office" will drive global economic growth, Chinese President Xi Jinping said ahead of a rare visit to India on Wednesday, playing down mistrust that has kept the Asian giants apart.

"As the two engines of the Asian economy, we need to become cooperation partners spearheading growth," Xi wrote in a column in The Hindu newspaper.

He said China's strong manufacturing base and India's software and scientific skills had massive potential both as a production base and for creating a consumer market.

Xi flew straight to Ahmedabad, in Modi's home state of Gujarat, where the prime minister gave him a bouquet of lilies.

The visit coincides with a slowdown in China's economy, with Chinese companies looking abroad for growth opportunities.

A deal worth $6.8 billion to set up two industrial parks for Chinese investment in India was on the cards, a senior Chinese official said in New Delhi at a separate business event where another $3.4 billion worth of agreements was signed between Chinese and Indian firms.

Further deals worth tens of billions of dollars were expected to be announced on the three-day visit, dwarfing the $400 million invested by China in India over the past 14 years.

Modi is keen on Chinese investment to help balance $65 billion in annual trade that is heavily tilted in China's favour. He is also seeking more access for India's IT services and pharmaceuticals to China.

The leaders may also discuss working together on civilian nuclear programmes and seek a solution for a long-running travel visa row, Indian officials said.

Modi hopes the leaders of the world's two most populous nations will establish a personal rapport to match the warmth he shares with Japanese Prime Minister Shinzo Abe, who wished him happy returns in a phone call on Wednesday morning, Indian media reported.

But beyond the smiles and the commercial embrace, ties between nuclear-armed India and China are marked by competition for energy and regional clout as well as a festering border dispute that led to a brief war 52 years ago.

Days before the two leaders shook hands and smiled in Ahmedabad, friction emerged over an alleged Himalayan border incursion by China and over a pact between India and Vietnam to explore for oil and gas in parts of the South China Sea claimed by Beijing.

In his column, Xi said the "Chinese Dragon" and the "Indian Elephant" both cherished peace and shared one of the most dynamic and promising bilateral relations of the 21st century.

In one sign that India wants the Xi visit to be a success, New Delhi asked the exiled Tibetan spiritual leader, the Dalai Lama, to reschedule an event in the capital so that it would not clash with the Chinese president's trip there on Friday.

The Dalai Lama, whom Beijing labels a separatist seeking an independent Tibet, has lived in India since fleeing across the Himalayas after a failed uprising against Chinese rule of his homeland in 1959. Police detained a small group of Tibetan protesters from outside China's embassy in Delhi on Wednesday. Other Tibetans were held in Gujarat.

In a little more than 100 days since he came to power, Modi has engaged in what his government describes as "an intensive state of global engagement", reaching out to smaller neighbours and clasping Japan's Abe in a bear hug on his first major trip outside South Asia.

He is due to visit Washington and New York at the end of the month.

India has taken a tougher stance on Beijing's practice of issuing stapled, rather than printed, visas to Indian citizens from the disputed regions of Arunachal Pradesh and Ladakh. Foreign Minister Sushma Swaraj told her Chinese counterpart she expected China to accept a "one India policy."

"When they raised with us the issue of Tibet and Taiwan, we appreciated their sensitivities. So we also want that they should understand and appreciate our sensitivities regarding Arunachal," she told reporters earlier this month.

India said on Tuesday it would firmly defend its 3,500-km (2,200-mile) border with China after domestic media reported a new face-off on the frontier.

"The two ... have the opportunity to craft a new kind of relationship between great powers that is very different from the Western-dominated, post-World War Two model of great power ties," said Jabin Jacob of the Institute of Chinese Studies in New Delhi.

"It remains to be seen, however, whether Modi and Xi can together summon the vision and statesmanship needed to grab the opportunity," he wrote in a commentary before the visit.

Modi is not the only regional leader seeking strategic influence, defence partners and economic opportunities.

Earlier this month, Abe visited Bangladesh and Sri Lanka, asserting Tokyo's interest in a region where it has ceded influence to China.

Xi followed this week with trips to the Maldives, the Indian Ocean island nation that New Delhi has long considered its area of influence, and Sri Lanka, where the two sides built on a blossoming relationship by agreeing to launch negotiations for a free trade agreement.

Here are some facts about India-China relations and issues likely to come up for discussion:

China beat India in a brief border war in 1962 and relations have remained sour over their still-disputed 3,500-km (2,200-mile) frontier.

India has reported a rise in incursions by Chinese troops in recent years, charges China denies. Modi is expected to take a tougher stance with neighbouring countries, including China.

In the first such signal, Modi's government eased restrictions on building roads and military facilities along the border to boost defence preparedness and close the gap on China's superior transport network.

China often refuses to stamp visas on Indian passports from disputed territories and instead staples them to the page, a practice that infuriates India.

China has refused to issue visas to Indians from Arunachal Pradesh state, where the two countries fought the 1962 war, saying they do not need permission to travel to China. China claims the whole of Arunachal Pradesh, which it calls "South Tibet".

In 2012, India started stamping its own map on visas it issues to holders of new Chinese passports that contain a map depicting disputed territory within China's borders.

The visa issue is likely to be on the agenda during Xi's visit.

China is India's largest trading partner, with two-way trade at about $66 billion last year. However, $51 billion of that came from Chinese exports.

India will also ask its neighbour to set up manufacturing units for exports as it seeks to revive its economy.

China is expected to pledge billions of dollars of investment in India's rail network that can help reform the now-decrepit British-built system.

China has committed $6.5 billion to finance the construction of a major nuclear power project in Karachi, the financial hub of neighbouring Pakistan, India's traditional foe. But Beijing might make a push to supply India with its new-generation reactors, The Hindu newspaper said.