More than 3,000 troops will take part in the exercises at the Matybulak military range in southern Kazakhstan. 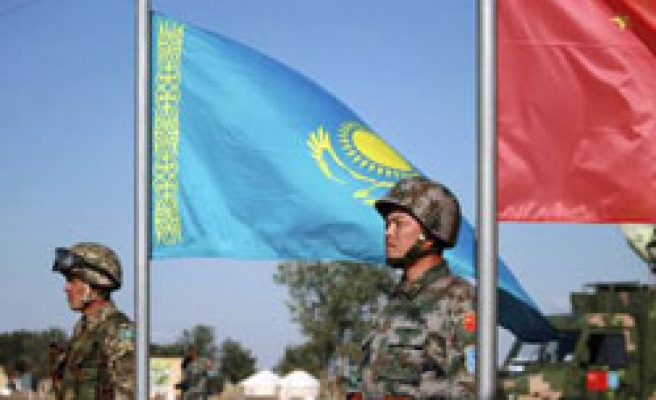 Russia holds control of Muslim states where pro-independence movements are still active while China has a region whose people are Muslim and complain state oppression and seek freedom for what they call "East Turkestan".

More than 3,000 troops will take part in the exercises at the Matybulak military range in southern Kazakhstan. Almost a third of them are Chinese, underlining Beijing's growing clout in central Asia, a region Moscow still sees as within its sphere of influence.

The "Peace Mission 2010" exercises are the largest in three years involving the Shanghai Cooperation Organisation (SCO), a six-nation group led by Moscow and Beijing that some analysts say might one day become a counterweight to NATO.

However, the SCO has limited itself so far to smaller military exercises and security initiatives.

Less than a month ago U.S. and British troops joined more than 1,000 Kazakh servicemen for the "Steppe Eagle" programme, which aimed to train Kazakh troops for future deployment with NATO peacekeepers.

The SCO, which also includes the ex-Soviet central Asian states of Kyrgyzstan, Tajikistan and Uzbekistan, has focused in recent months on fighting "terrorism" in the region, as well as drug trafficking from Afghanistan.

"Now and for the next few years, terrorism, separatism and extremism will remain serious factors in the stability of this region and the world," Ma Xiaotian, deputy chief of staff of the Chinese armed forces, said at a ceremony opening the exercises.

"Upholding security and stability in the region is the main aim of every SCO member state and every officer and soldier taking part in this exercise."

Kazakhstan's Defence Ministry said that Russia, China and Kazakhstan had each contributed 1,000 troops while Tajikistan and Kyrgyzstan each sent 150. Uzbekistan was also invited, but said it would not send troops.

At the opening ceremony troops marched past, accompanied by a brass band, and flags of the five participating nations were raised to their respective anthems and an artillery volley. A convoy of tanks then rolled across the steppe.

The SCO's member states have a population of over 1.5 billion, or a quarter of the world's population.