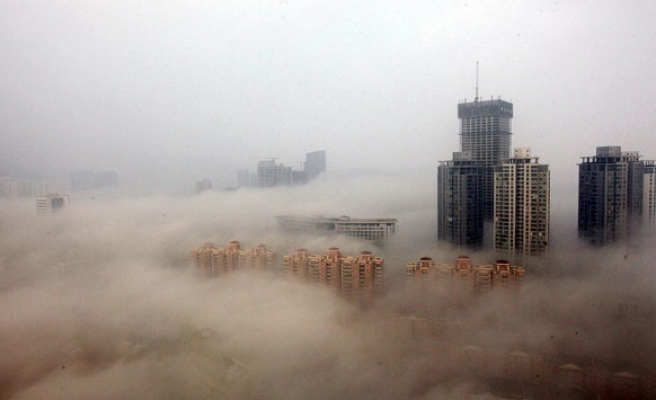 The steel plants and factories scattered across China's Shandong province have made it one of the most contaminated areas of the world's biggest polluter. But for one company, that just makes the business climate better.

ASL Masks says it turned out more than 100,000 face coverings last year and aims to more than double that in 2016 as China struggles to shake off the toxic smog produced by its heavy industries.

Dozens of middle-aged women wearing bright blue hats and aprons worked in near silence, sliding air filters into holes in the plastic products before threading on straps and yellow buckles.

"Smog is bad for the lungs. We all wear masks around here," said packager Chen Aimei.

Levels of PM2.5, tiny particles which can embed deep within the lungs, are usually above the World Health Organization's recommended maximum of 25 parts per million. In the northeastern city of Shenyang they reached more than 1,400 in November.

The pollution – mostly generated by burning coal to power industry and heat homes, along with road traffic – is responsible for hundreds of thousands of premature deaths in China each year, experts say.

Public anger is mounting over the issue, but a wave of firms see silver linings to the smog, including air purifier and pollution monitor manufacturers, as well as mask makers.

Even when many Chinese factory workers had downed tools for the Lunar New Year holiday in February, CEO Zhang Wenchao kept his staff on until the last possible moment.

"December to April is our busiest period... because it's the peak for pollution," he said.

ASL started making industrial masks in the 1980s, but has since turned to the more lucrative anti-pollution equipment market.

Demand has grown as authorities have started releasing more data on the problem, and state media estimate the Chinese pollution mask market was worth nearly 4 billion yuan ($600 million) in 2015.

ASL has designed a product specially adapted for youngsters by measuring the faces of 100 children.

"People's awareness of pollution protection is increasing all the time. People know that PM 2.5 is bad for them," Zhang said.

Shandong, in eastern China, is the center of the industry, with another production hub, Dadian, dubbed the "mask village" for producing the cheapest specimens.

It can be a murky business. Dadian was hit by scandal last year when local media reported second-hand fabric used to make the masks was piled up beside fresh manure, and slept in by stray dogs.

Customs officers in China's commercial capital Shanghai said in December they had seized 120,000 fake respiratory masks, labelled as being made by US manufacturer 3M Co.

In other cases, hospital masks have been washed and resold as new, reports said.

But although average particulate levels in Chinese cities fell 10.3% in 2015, according to official figures collated by Greenpeace, none met the WHO's standards.

On Friday, a day before Li opened this year's NPC session, PM2.5 counts were well over 300 in the capital.

Beijing and other cities in China issued their firs ever red alerts for pollution this winter, banning half of all private cars from roads and advising some schools to close.

The alerts struck fear into millions – and were a boon to companies selling protection from the smog.

"In the red alert, suddenly all these people who never cared were like: 'Oh my God!'" said Liam Bates, the founder of a company producing handheld pollution monitors, mainly for the Chinese market.

"In 24 hours we sold pretty much what we sold the entire month before," he added.

Zhang, 29, whose father bought ASL when it was an unprofitable state-owned enterprise in the 1990s, said he had amassed considerable wealth, but declined to go into detail.

Behind a large mahogany desk, he brandished his latest invention – an air filter which covers only the nose – and insisted he hoped efforts to reduce pollution would be effective, even at the expense of sales.

"We are like doctors looking at patients," he said. "No doctor wants his patient to be sick."

Still, Zhang does not expect demand to die. "Over the next decade, there will be efforts to improve the air quality," he said. "But it won't be completely improved".