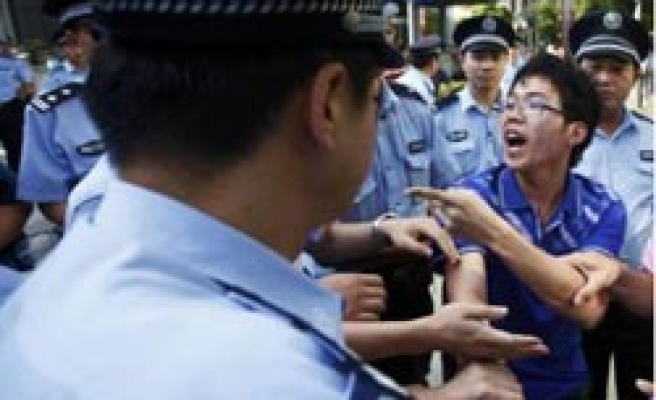 About a hundred Chinese protesters on Saturday demanded Japan free a Chinese boat captain, but tight security and rain deterred a bigger show of anger over an issue that has ratcheted up territorial tensions.

Under a steady downpour, the protesters, mostly in their 20s, gathered in front of the Japanese embassy in Beijing and held placards and yelled slogans denouncing the detention of the captain, seized by the Japanese coast guard after their boats collided in the disputed East China Sea over a week ago.

They were surrounded by hundreds of police and security forces, who took placards away from some people hoping to protest and pushed along the demonstrators as the crowd swelled.

"Return our boat captain, release him now," a group of protesters yelled. "Down with Japanese imperialism," they shouted. "Americans get out of Asia."

The captain's detention has become an emotive focus for long-running disputes between Beijing and Tokyo about territorial rights in the seas, especially around a group of uninhabited islets, called the Diaoyu islands in China and Senkakus in Japan.

But China's ruling Communist Party is wary of any unrest and appears to have no appetite for a repeat of 2005, when sometimes violent protests against Japan broke out in several cities.

"The boat captain is a hostage, and we came to tell Japan to hand him back and get out of the Diaoyu Islands," said Hu Xu.

Saturday marked the 79th anniversary of the "Mukden incident", a watershed event in Japan's occupation of northeast China.

The memories of Japan's brutal occupation of China, which lasted throughout World War Two, continue to stoke Chinese public ire about Japan, and the incident's anniversary is marked every year, especially in Mukden, now called Shenyang.

The official Xinhua news agency said there was another protest in Shenyang, where sirens will wail later to commemorate the day.

"To remember history is not to remember hatred, but to prevent the tragedy from recurring," Xinhua quoted Wang Jinsi, a member of the Chinese Society for Anti-Japanese War History, as saying.

A small demonstration was also staged outside the Japanese consulate in the commercial hub of Shanghai, where torrid protests broke out in 2005. It was soon dispersed by large numbers of police after some scuffles.

"I don't understand what the government is doing. They should let everyone at least see that the Chinese people are not happy," said Wang Qi, 30, complaining about the police ending their protest.

Four men taped an 8 metre (26 ft) banner to lampposts outside the consulate, which was cordoned off by police, reading: "The Diaoyu islands are China's! It was illegal to detain the boat! Return the captain!"

In Beijing, lines of People's Armed Police and plainclothes officers bolstered security around the Japanese embassy.

Clusters of people behind the police cordons occasionally yelled slogans and held up signs denouncing Japan. Some sang the Chinese national anthem.

On Friday, China said it had the right to do what it wants in gas fields in the East China Sea, adding another layer of friction between the two big Asian powers. Japan has warned it would take "appropriate steps" if there is proof that Beijing has begun drilling.