Demonstrators shout slogans as they hold placards during a protest outside a church in New Delhi. 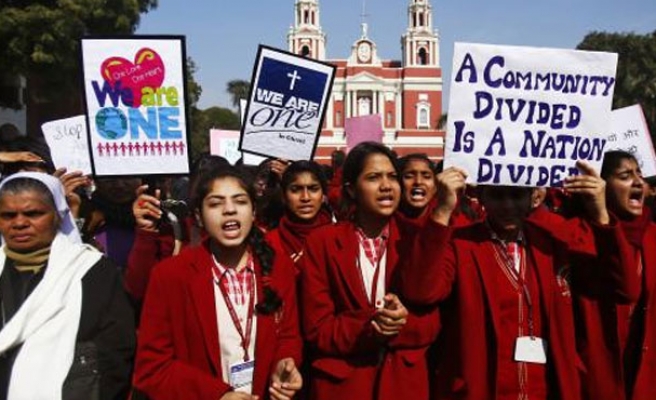 Hundreds of Christian protesters clashed with police in India's capital on Thursday as they pressed demands for government protection amid concern about rising intolerance after a series of attacks on churches.

Demonstrators were pulled on to police buses as they tried to march from one of New Delhi's largest cathedrals near parliament to the residence of Home Minister Rajnath Singh.

Political rivals have accused the ruling Hindu nationalist Bharatiya Janata Party of exploiting religious divisions in the run-up to state elections in Delhi at the weekend.

Police have imposed an emergency law known as Section 144 which prohibits gatherings. About 200 police were stationed outside the cathedral while several hundred protesters were inside, a Reuters photographer said.

"All that we are asking is 'what are the police doing? What is the government doing?'," said one protester who gave his name as Garry. Christians wanted proper security and safety, he said.

Singh tweeted that he met Christian leaders on Thursday to assure them he would not tolerate any discrimination.

He added that he promised an independent investigation into the church attacks and said he has asked the police to ensure the security of churches and other places of worship.

A spokesman for Delhi police did not respond to a request for comment.

Five churches in the capital have reported incidents of arson, vandalism and burglary. The latest was reported on Monday when an individual stole ceremonial items.

In December, a Catholic church in north Delhi was gutted in a fire in a case of suspected arson.

U.S. President Barack Obama warned on a visit to India last week that the country's success depended on it not splintering along religious lines.

Religious conversions have become a divisive political issue since hardliners with links to the BJP said Hinduism was under threat and started a campaign to convince Christians and Muslims to change their faith.