Followers of Dr. Tahir-Ul-Qadri wanted to recieve their party leader, who has called for a "revolution" in Pakistan. 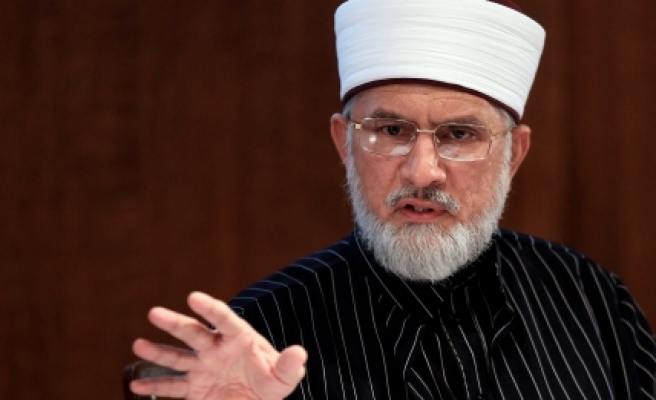 A prominent cleric landed in Pakistan on Monday after his plane was diverted from the capital Islamabad where his supporters clashed with police amid government concerns about the return of a man who describes himself as a revolutionary.

Tahirul Qadri, a Pakistani preacher turned political activist who usually lives Canada, is a divisive figure in Pakistan where he made headlines last year when he led mass rallies against the previous government.

The plane carrying Qadri circled above Benazir Bhutto International Airport near Islamabad for an hour and a half before it was diverted to the eastern city of Lahore.

"We want no corruption, we want no terrorism in our country," Qadri told Reuters aboard the plane. "We want total transparency of institutions."

In chaotic scenes rarely seen in the usually orderly Pakistani capital, police fired tear gas and fought running battles with Qadri supporters outside the airport after 2,000 protesters gathered there to greet their leader.

Qadri's sudden ascent to prominence has prompted speculation that the army, which ruled Pakistan for decades, may be using him as a proxy in its efforts to sideline the civilian government.

His comeback comes at an uneasy time for Prime Minister Nawaz Sharif whose civilian government has failed to engage Taliban rebels in peace talks, prompting the army to launch a major offensive against them.

Even after the aircraft landed in Lahore, Qadri and his supporters refused to leave the plane, demanding it fly back to Islamabad or the army send a representative to give him protection.

"He wants to bring a peaceful democratic revolution," Mursaleen told Reuters. "He wants to topple the whole system."

It is hard to estimate Qadri's popularity in a country with few reliable opinion polls but his proximity to the army could catapult him to the centre of a brewing protest movement.

Discontent with the government is already high due to power shortages that have crippled the economy as well as a persistent Taliban insurgency which stages attacks around the country.

Reflecting the government's anxiety, police had cordoned off major roads leading to the airport serving Islamabad with cargo containers, and blocked mobile phone services to prevent protesters from communicating with each other.

At least eight people including a policeman were killed in Lahore last week when protesters clashed with police in a standoff over Qadri.

"Long live the army!" and "Revolution will come!" chanted his supporters who had gathered outside the airport in the military garrison city of Rawalpindi near Islamabad.

"We just want to give a peaceful welcome to our leader but they (government) pounded us with heavy tear gas," said one protester, Tajamul Hussain, in his early 20s.

"Their days are numbered, God willing Doctor Qadri will bring revolution to Pakistan."