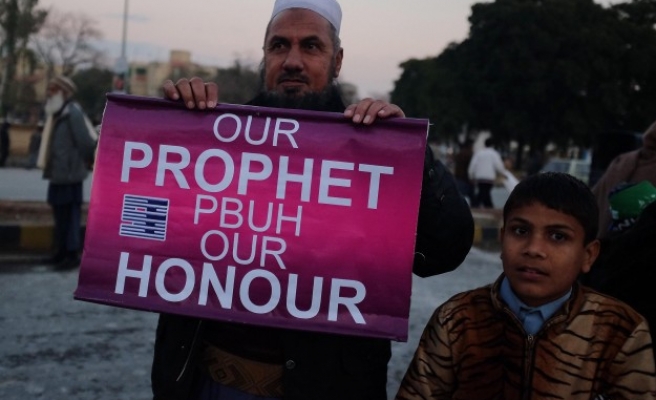 Government forces in Indian-controlled Kashmir fired warning shots and tear gas Friday to disperse Muslim protesters angry at the publication of a caricature of Prophet Muhammad in the latest issue of French satirical weekly Charlie Hebdo.

Indian-held Kashmir remained shutdown with demonstrations in several places in protest against the publication of cartoons by the French magazine and several other Western media outlets.

Government offices and businesses remained shut while public transport stayed off the roads as senior Kashmiri resistance leaders had called for a complete shutdown on Friday.

Hurriyat is an alliance of pro-independence movements in Indian-held Kashmir.

The Indian government responded to the protests by imposing a curfew in several areas of Srinagar, the capital of Indian-held Kashmir.

Protests broke out in Srinagar after Friday prayers with worshippers carrying placards reading "Down with Charlie" and chanting slogans against the Indian rule and in favor of Islam.

Security fired shots and tear gas in at least at three places, while the protesters hurled rocks at them, police said.

Similar protests were also reported in several towns and villages in the disputed Himalayan region.

There were no immediate reports of any injuries.

The Indian police also arrested Jammu Kashmir Liberation Front chairman Malik while Hurriyat chairman, 86-year-old Geelani, has been under house arrest for most of the last four years.

The shutdown received support from hundreds of youths across the valley, many of whom believed that the cartoons were not only an attack on the Islamic faith but saw it as a part of a larger assault by the West on Muslim identity.

"What right do they have to publish a cartoon of our Prophet and hurt a billion Muslims across the world? They have consistently used freedom of expression to further western hegemony. Why is it so difficult for them to understand that we consider any representation of the Prophet as blasphemous?" Mohammad Saleem Khan, a history student at Kashmir University protesting in the demonstrations, told The Anadolu Agency. "They consider the Holocaust as sacred, which can't be touched by satire, while they think they can lampoon our Prophet."

Since 1989, Kashmiri resistance groups in Indian-held Kashmir have been fighting against Indian rule for independence, or for unification with neighboring Pakistan.