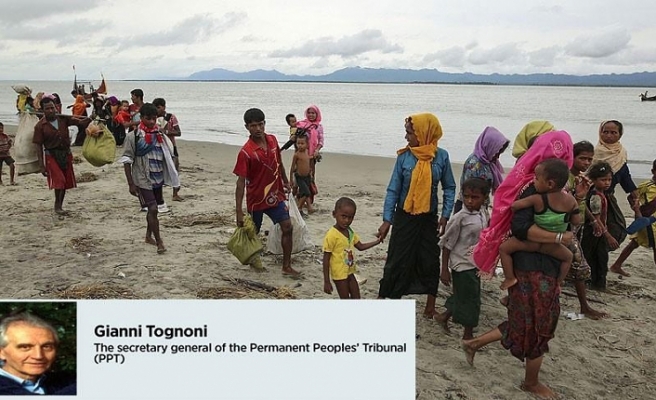 “All evidence on what to be done are available. All obligations in front of the needs are clear,” said Gianni Tognoni, the secretary general of the Permanent Peoples’ Tribunal (PPT).

He welcomed the U.S. House of Representatives’ recent vote on Rohingya genocide.

The U.S. House of Representatives approved a resolution by a vote of 394-1 on Dec. 14 affirming “the Burmese military’s actions were genocide against the Rohingya people."

The U.S. lower house’s decision “is definitely an event which must be hailed as a potentially critical step forward in the political, even more than in juridical sense in the international scenario,” Tognoni said.

“All words have been said,” he said and called on the U.S. and other global actors should act for the resolution of the crisis.

He termed the role of the International Criminal Court as “very significant and mandatory” in this regard.

He said all political groups “who have recognized the gravity of the sufferings, and are therefore perfectly aware of what could and should be done now […] could find an agreement to act.”

International organizations such as European Union, ASEAN, OIC, as well as nations “must translate their awareness and obligations into concrete plans”, Tognoni added.

Any delay to take global action against the “brutality” in Myanmar, where “the process of genocide is ongoing,” must be considered as “expression of impunity” as well as “an aggravation of the intolerable sufferings, which all the field missions in the concerned areas have documented,” the head of the rights group said.