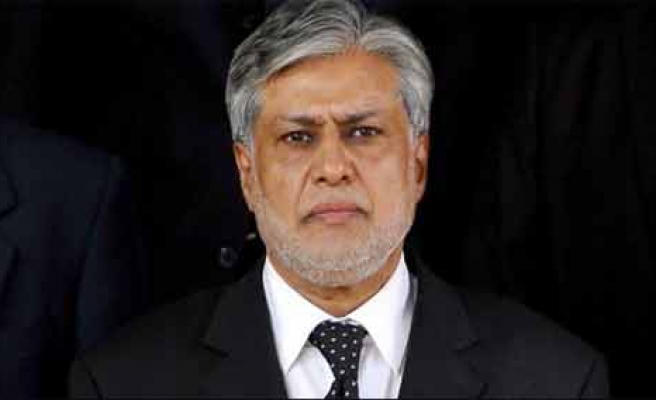 An anti-corruption court in capital Islamabad Monday issued a bailable arrest warrant for the finance minister after he failed to appear before an ongoing trial, counsels and local media reported.

Ishaq Dar is accused of owning assets beyond his known sources of income.

Dar is currently in London along with Prime Minister Shahid Khaqan Abbasi, and other top ruling party leadership to meet the ousted premier Nawaz Sharif.

The minister’s counsel, Khawaja Harris, however, cited “illness” as the reason for his absence from the court hearing.

According to Harris, the finance minister, whose son is married to Sharif’s daughter, had fallen ill in the Saudi city of Jeddah, and subsequently flew to London for treatment.

The prosecution opposed the defense's plea, and accused the finance minister of deliberately skipping the court proceedings.

Granting the prosecution’s request, the judge, who is also trying Sharif in three corruption cases, issued a bailable warrant for the finance minister, and adjourned the hearing till Nov. 2.

On July 28, a five-member Supreme Court bench had ousted Sharif in the Panama Papers scandal, and ordered opening of three corruption cases against him, and one against Dar.

The court had already issued a non-bailable warrant for Sharif for his absence from the proceedings.

Sharif is currently in London where his wife is being treated for cancer.

According to evidence submitted to the country's National Accountability Bureau, the Sharifs have four luxurious London apartments, two steel mills in Saudi Arabia and several offshore companies in the U.K.

Last April, the Panama Papers revealed that three of Sharif’s children owned offshore assets that were not shown on his family's wealth statement.