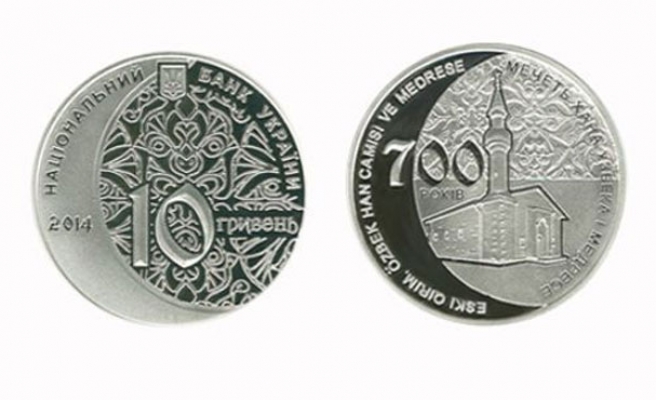 National Bank of Ukraine (NBU) has introduced 5 and 10 hryvna coins dedicated to Crimean mosque of Uzbek Khan and Madrassa built in Crimea in 1314.

The 10 hryvna coin is made of silver, while 5 hryvna coin made of German silver-- a copper alloy with nickel and often zinc. 2000 copies of each coin were issued.

The design of two coins is the same. There is small coat of arms of Ukraine at the obverse and an inscription “Natsional'niy bank Ukrainy” (National Bank of Ukraine), nominal value of the coin and the year: 2014.

At the reverse of the coin there is the mosque of Öz Beg Khan and Crimean Tatar “ESKI QIRIM. ÖZBEK HAN CAMISI VE MEDRESE” and Ukrainian “MECHET' KHANA UZBEKA I MEDRESE” inscriptions.

According to Ukraine Mufti Said Ismagilov, by printing money that way, Ukraine shows that it still claim on the Crimea.

The mosque was built by Khan Uzbek, an adherent of Islam. This mosque is, in fact, the oldest mosque in the Crimea. Nowadays it looks like a basilica-type rectangular building with a built-in minaret in the north-east corner and an entrance from the north.

The construction started in 1314; two years after Khan Uzbek ascended the throne of Golden Horde. A Turkish traveler Evliya Celebi mentioned in his notes that under the ruling of Menli Giray in 1512-1513 there used to be a cathedral mosque.