Big ticket athletes have pulled out of the Commonwealth Games, held every four years. 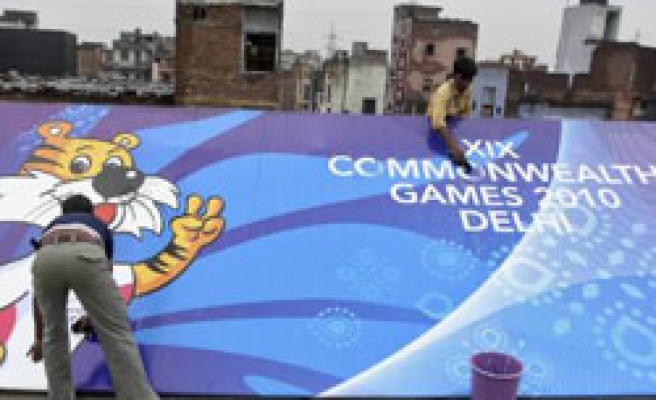 Big ticket athletes have pulled out of the Commonwealth Games, Scotland has delayed its departure to New Delhi and the New Zealand swimming team is seeking a "Plan B" should India's showcase event be cancelled.

India had hoped to use the Games, held every four years as a display of its growing global economic and political clout rivalling China.

Instead, the Games have already descended into farce with some countries giving an ultimatum of a few days to get the Games ready or face the prospect of national withdrawals from an event which is so far only showcasing Indian traveller-tale cliches of filth, chaos and corruption.

Wales team chiefs said they had given organisers until later on Wednesday to guarantee that the venues and athletes' village are safe before they make a decision on what to do next.

Thousands of athletes from around the world are due to start arriving this week, with the Games due to start on Oct. 3.

A portion of false ceiling in the weightlifting venue caved in on Wednesday, a day after the collapse of a footbridge by the main stadium, injuring 27 workers, which highlighted problems facing organisers as they race to complete work.

Nobody was injured at the weightlifting venue.

"There have been dogs roaming around the village, the apartments are filthy, there are piles of rubble and right now it's not fit to receive 6,500 athletes and officials," Michael Cavanagh, chairman of Commonwealth Games Scotland, told the BBC.

"National Shame" was the headline of one Indian newspaper.

New Zealand's swimming team left today for Abu Dhabi, with an official saying another competition was in the pipeline if the Games are cancelled. Australian and Canadian squads are in Singapore and the British in Doha, suggesting another Asian meet could be hastily organised.

There have been reports of stray dogs, stagnant water, workers urinating in public, and human faeces being found at the unfinished village where the athletes will live.

Stagnant pools of water, breeding grounds for dengue mosquitoes, lie around and a Reuters reporter said homeless people were living outside the main stadium.

Indian government officials say the problems, including the roof collapse on Wednesday, are mostly minor glitches and the Games will be a success.

But criticism is mounting even within India, where the country's leadership is seen as out-of-touch and having failed to understand what is expected of a nation like India, which is not short of funds nor skilled labour to host a major sporting event.

It also highlights concerns about how India will effectively spend some $1.5 trillion on infrastructure over the next decade which is fundamental to manage fast economic growth and a growing population of 1.2 billion.

World discus champion Dani Samuels of Australia pulled out of the Games because of security and health concerns, as did England's world triple jump champion Phillips Idowu.

Four other champions have quit due to various reasons, including injuries, in the last 24 hours.

"Sorry people, but I have children to think about. My safety is more important to them than a medal," Idowu wrote on his Twitter feed.

An epidemic of Dengue, in part blamed on stagnant water around unfinished construction sites, has hit Delhi and thousands of people are being treated in hospital.

Many residents are fleeing Delhi during the Games, worried about security and traffic chaos.

Only days after two foreign visitors were shot and wounded by unknown assailants in Delhi, Australian TV broadcast how a reporter bought bomb making devices to smuggle through security points. Indian police denied he ever crossed a checkpoint.

Highlighting how the Games has become a political minefield for a government already reeling under high inflation, officials from Prime Minister Manmohan Singh's office toured the village.

"The prime minister is of course extremely concerned," Cabinet Secretary K.M. Chandrasekhar, who is overseeing the preparations, told CNN-IBN.

So far 77-year-old Singh, who took charge of monitoring the preparations a month ago after criticism of missed deadlines, has remained silent, underscoring what critics say is his out-of-touch leadership.

Sporting power Australia backed the Commonwealth Games on Wednesday and many venues, including the main Jawaharlal Nehru stadium, have been praised as world-class.

Officials note that other events, such as the 2004 Athens Olympics, were dogged by problems but turned out fine.

However, Canada's Games team said it might delay the arrival of some of its athletes if adequate accommodation was not available.