NATO confirmed several of its members were attending a shura, or meeting, in Salangi's office at the time of the attack. 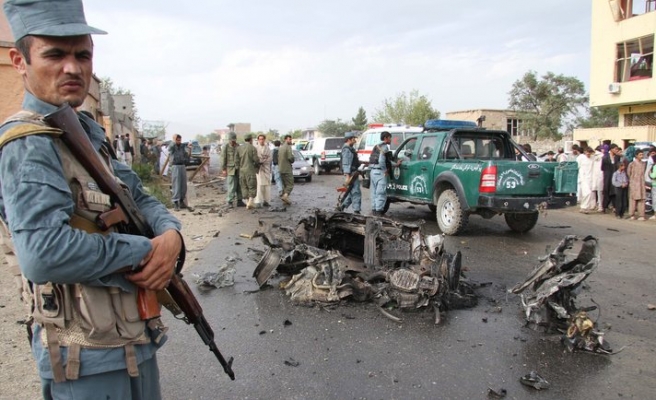 Suicide bombers killed at least 22 people in a bold attack on a governor's compound in central Afghanistan during a security meeting on Sunday, officials said, with gunbattles and several blasts heard before the assault was put down.

A Reuters witness and others nearby reported hearing at least five explosions as Afghan security forces inside the compound of Parwan governor Abdul Basir Salangi fought back.

Afghanistan's Interior Ministry said 22 people were killed and 34 wounded. The dead included 16 government employees and six police, it said in a statement.

Parwan lies about an hour's drive northwest of the occupied capital, Kabul.

Eight days ago, a rocket-propelled grenade fired by the Taliban brought down a NATO helicopter in another central Afghan province near Kabul, killing 30 U.S. troops and eight Afghans in the worst single incident for foreign forces in 10 years of war.

The Taliban claimed responsibility for the Parwan attack. Zabihullah Mujahid, a spokesman for the group, said the assault began when a suicide car bomber detonated his explosives at the gate of the compound.

He said five other bombers made it inside the compound, where he claimed U.S. officials were taking part in a meeting.

"Many people were killed, including Americans, but we still don't have the exact information," Mujahid said by telephone from an undisclosed location.

The twisted wreckage of what appeared to have been the car bomb lay outside the gate of the compound as Afghan police and soldiers swarmed around the scene.

Sharafuddin Rahimi, an adviser to the Parwan police chief, said a meeting involving the police chief, the governor "and some foreign advisers" was under way when the attack was launched but said the attackers did not reach the meeting room.

The NATO-led International Security Assistance Force (ISAF) in Kabul confirmed several of its members were attending a shura, or meeting, in Salangi's office at the time of the attack but said none was injured.

Rahimi said one of the police chief's bodyguards was among those killed, as well as women and children.