The Taliban said they were sending two messages: One to the Afghan government and one to the British," spokesman Zabihullah Mujahid said. 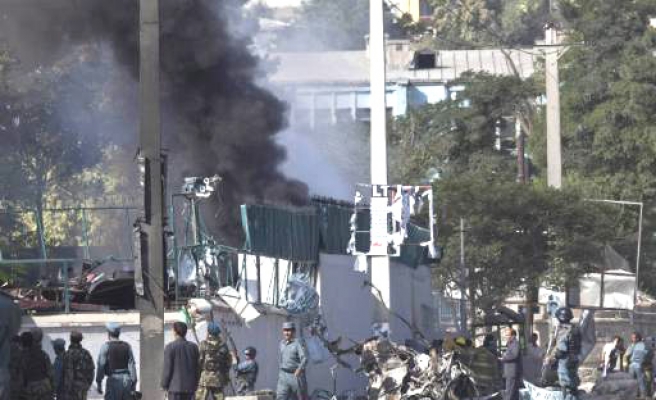 The Taliban laid siege to a British centre on Friday, killing at least nine people during an hours-long assault in what the group called a warning to London as the country celebrated 92 years of independence from British occupation.

The Taliban set off the attack with two large explosions before dawn, then stormed the British Council building and fought with Afghan security forces and NATO troops. At least eight explosions in total were heard by early afternoon.

Scores of Afghan and NATO troops surrounded a compound strewn with wooden and metal debris while two helicopters hovered on watch above. A ministry of interior spokesman said at least 12 people were wounded during the assault.

"Eight members of the Afghan national police and one foreign soldier were killed," Mohammad Zahir, head of criminal investigations for the Kabul police, told Reuters. He said he was not able to confirm the nationality of the foreign soldier.

A British embassy spokesman in Kabul confirmed the attack. "We are coordinating with the Afghan security forces," he said.

A Reuters photograph taken at the scene showed what appeared to be a white male being lifted onto a stretcher with blood across his back and wound to the back of his head. A second photo showed a Union Jack insignia on his left shoulder, and a different uniform than those warn by council's guards.

Earlier, police believed there were foreign people trapped inside the building, and as many as three assailants were believed holed up there. By afternoon, there was one left.

"There is one suicide bomber left alive in the bulletproof basement of the British Council," a ministry of interior official who declined to be named said later.

Afghan and NATO troops were trying to kill him.

A Reuters witness heard a large explosion shortly after 1 p.m. local time (0830 GMT), the seventh of the day, in what the Ministry of Interior source said could have been an attempt to kill the last attacker or him detonating an explosive.

The Taliban said they were sending two messages: One to the Afghan government and one to the British," spokesman Zabihullah Mujahid told Reuters by telephone from an undisclosed location.

"We are now reminding them that we will become independent again from all foreigners, especially from the British," Mujahid said, referring to Afghanistan's independence from British rule 92 years ago, which the country was marking on Friday.

The NATO-led force in Afghanistan also confirmed there had been two explosions near the British Council, which is a state-funded agency. It is not part of the main British embassy in the diplomatic area of Kabul.

Security was beefed up across the capital ahead of the date.

After the United States, Britain has the second-largest force in the NATO-led occupation, with around 9,500 troops.