A blast ripped through a congregation of worshippers during Friday prayers at a mosque in Pakistan's northwestern tribal region of Khyber. 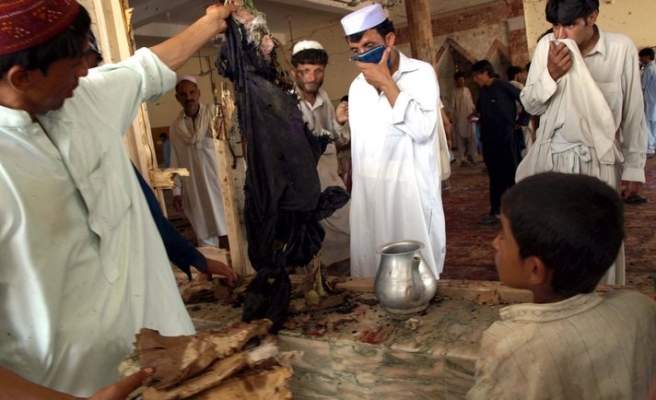 A suspected suicide bomber killed at least 34 people in a mosque during Friday prayers in Pakistan's northwestern tribal region of Khyber on the Afghan border, a top government official said.

More than 100 people were also wounded in the attack in Jamrud, the main town of Khyber, said the deputy chief of the Khyber administration, Khalid Mumtaz Kundi.

"We have found ball-bearings at the blast site which indicate it could be a suicide attack," he said.

Kundi said 20 bodies were brought to two hospitals, while relatives took others directly to their homes.

A witness, Haji Zarmeen, said he helped removed at least 12 bodies from the rubble. A television channel put the death toll at 40.

TV footage showed blood on the walls and ceiling of the mosque as people collected clothes and sandals scattered by the blast.

No one has claimed responsibility for the attack.

Pakistan has seen a wave of violence in recent years in which thousands of people have been killed.

There have been several bomb attacks since U.S. special forces killed Osama bin Laden in a secret raid in a Pakistani town in May.

Drone strikes have been a major source of friction between the United States and Pakistan. Ties have deteriorated since the death of bin Laden in the attacks which Pakistan sees as a violation of its sovereignty.

Seven people were killed on Friday in violence that started as gang warfare, but has since expanded to include political and ethnic clashes -- a phenomenon that has long plagued the city of more than 18 million.