A bomb exploded in Bangkok early, seriously wounding a man as anti-government protests have remained. 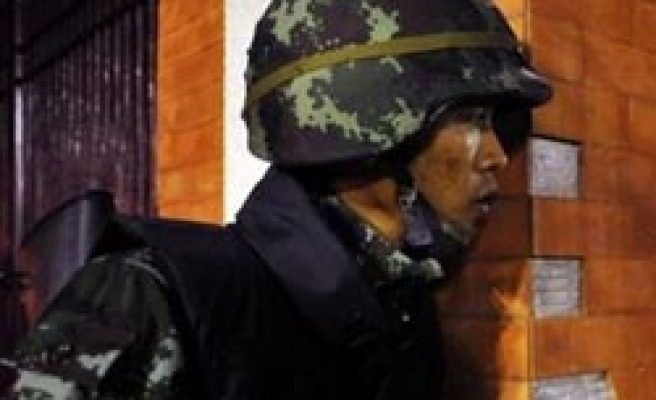 A bomb exploded in Bangkok early on Friday, seriously wounding a man as anti-government protests have remained.

An opposition leader said the incident was aimed at discrediting anti-government activists. The government also denounced the attack.

Police said a grenade tied with an oiled rubber band and wrapped in a garbage bag exploded at about 2 a.m. (1900 GMT Thursday) in an alley near Victory Monument, a transportation hub usually choked with traffic and surrounded by hospitals, military compounds and nightclubs.

"I do not want to speculate on the cause at this point and whether it's politically motivated or an attempt to stir chaos," said Metropolitan Police Chief Lieutenant General Santarn Chayanond.

No group took responsibility for the attack which followed a blast that killed one person and wounded 10 on Sunday in a shopping district occupied by tens of thousands of "red shirt" protesters for seven weeks until a May 19 army crackdown.

Jatuporn Prompan, an anti-government protest leader, condemned the attack, which wounded a garbage collector. "We condemn anyone who carried out such act of cowardice in an attempt to discredit the opposition," he said.

Several workers in the area said they believed the attack was brought on by a local dispute over illegal parking by taxi vans and was not politically motivated.

Prime Minister Abhisit Vejjajiva lifted a state of emergency in six provinces on Thursday, but said the special security law would remain in place in 10 others, including Bangkok.

The emergency decree has been in force since April, giving security forces broad powers to deal with anti-government protests which spiralled into the worst political crise in modern Thai history when demonstrators clashed with troops in April and May, leaving 90 people dead and at least 1,800 wounded.

The state of emergency bans political gatherings of more than five people and gives the government powers to impose curfew and censor media and detain suspects without charge for 30 days.

Voters in the north and northeast, hotbeds of anti-government activists, broadly support former premier Thaksin Shinawatra, who was ousted in a coup in 2006 and is wanted on terror charges for his alleged role in orchestrating the May riots.