Sketches of two suspects have been released to the public. 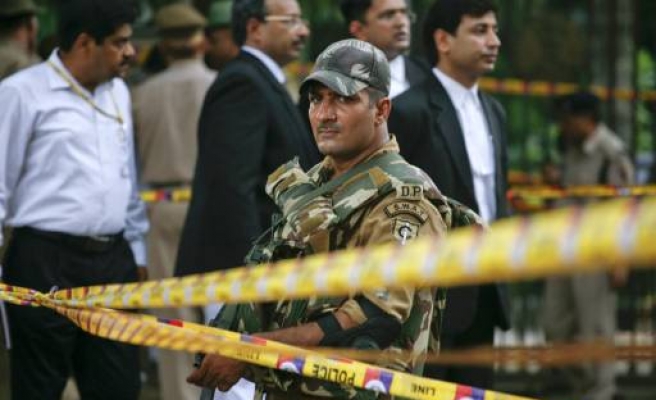 A powerful bomb placed in a briefcase outside the High Court in New Delhi killed at least 11 people and wounded 76 on Wednesday.

The bomb dug a crater three to four feet deep near the main reception counter where passes are issued for lawyers and visitors to enter the sprawling sandstone building before the main security checkpoint.

Sketches of two suspects have been released to the public.

Television images showed scores of lawyers running from one of the main gates of the building just after the explosion amid rubble and chaotic scenes. Police cordoned off the area, not far from parliament and the prime minister's office.

"I think I saw this guy (suspect). He was in white, aged 34 or 35, carrying a briefcase and jumping the long queue," an unnamed middle-aged man told Indian television channels.

"There must have been some 80 people at that time when the bomb went off. I crouched immediately but the man behind me, he did not and was hit (by shrapnel) to his right arm."

Two lawyers at the court, Namita Roy, 48, and Hargovina Jah, 40, told Reuters the scanner and metal detector at Gate 5 of the court where the blast occurred were not working.

"This is definitely a big security lapse on the part of the police. For example, yesterday even the (body) scanner was not working. The security, more or less, is very weak, especially in view of the blast that happened a few months ago," said Roy.

Authorities said they are investigating a claim of responsibility allegedly made by the Harkat-ul-Jihad Islami (HUJI) group -- allegedly bases in Pakistan and Bangladesh. Ilyas Kashmiri, who U.S. authorities believe was recently killed in Pakistan, was the head of the group.

In an email to the National Investigation Agency (NIA), the South Asian group called on India to repeal the death sentence of a man convicted in connection with an attack on the Indian parliament in 2001 and warned it would otherwise target major courts in the country.