A bomb hidden on a motorbike exploded outside an ethnic Chinese community organisation in a border town of Thailand's Sungai Kolok district, in Narathiwat province, police said. 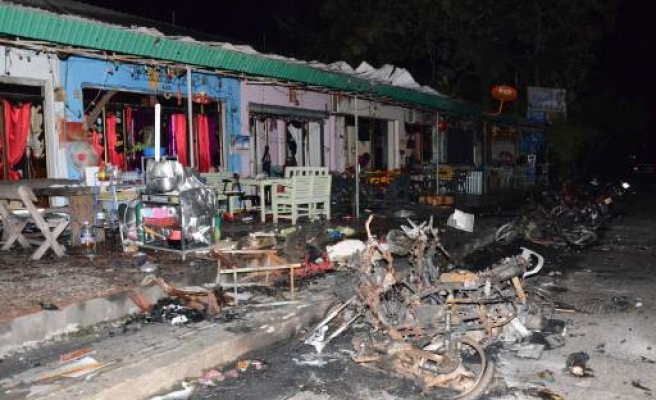 A bomb hidden on a motorbike exploded outside an ethnic Chinese community organisation in a border town of Thailand's Sungai Kolok district, in Narathiwat province, police said.

That was followed by another motorbike bomb and a car bomb outside two hotels on a busy street lined with bars.

The dead included a tourist from Malaysia, police said.

The attack came hours after a police officer and a defence volunteer were gunned down in a mosque in Yala province by four Muslims believed to be separatists. There were nearly 100 witnesses, police said.

The main targets for the shadowy militants are members of the security forces, teachers and government officials, but Muslims are often killed for working for the Thai state or acting as informants.

The region was an independent sultanate a century ago before it became part of mostly Buddhist Thailand.

Shootings in mosques have happened several times in the three provinces.

In June 2009, 11 Muslims were killed at prayer at the Al-Furqan mosque in Narathiwat. Many Muslims and rights groups believed that attack was carried out by Buddhist vigilantes. No one has been charged with the killings.

Friday's violence came a day after five paramilitary rangers were shot dead in an ambush in Pattani province after the pickup truck they were riding in was hit by a bomb.

The rubber-rich region borders Malaysia and is just a few hours by car from some of Thailand's best-known tourist beaches such as Krabi and Phuket. However, the near-daily shootings and bombings have been concentrated in the three provinces and neighbouring Songkhla.