A suicide bomber struck a rally in the Pakistani city of Quetta, expressing solidarity with the Palestinian people. 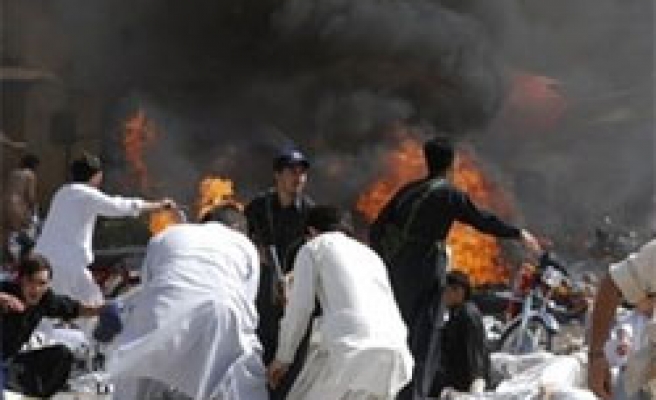 A suicide bomber struck a rally in the Pakistani city of Quetta on Friday, killing up to 43 people in the attack on the Shi'ite rally expressing solidarity with the Palestinian people.

More than 100 people were wounded in the Quetta attack, which like triple bombings at a Shi'ite procession in the city of Lahore this week.

"There are 24 dead in the Combined Military Hospital and the remaining are in two other hospitals," said a hospital official in Quetta, where dozens of dead and wounded lay in the attack after the blast that also engulfed vehicles in flames.

Earlier, the Taliban took responsibility for Wednesday's bombings in Lahore.

"It's revenge for the killings of innocent Sunnis," a spokesman for Qari Hussain Mehsud told Reuters by telephone from an undisclosed location.

Anger is spreading over the government's sluggish response to the floods, raising the possibility of social unrest.

"The scope and scale of this discontent will depend on the government's performance in preventing a second wave of deaths, loss of livelihood, and shortages of essential food items," said Eurasia consultancy group.

Pakistan is also faced with an economic catastrophe, with the floods causing damage the government has estimated at $43 billion, almost one quarter of the South Asian nation's 2009 GDP.

International Monetary Fund (IMF) will give Pakistan $450 million in emergency flood loan and disburse funds in September to help the country's economy cope with the devastation of the floods.

Talks in Washington with a delegation led by Pakistan's Finance Minister Abdul Hafeez Shaikh on the terms of an $11 billion IMF loan program left him satisfied with the country's commitment to reforms, the IMF chief said.

Under the 2008 IMF loan program, Islamabad pledged to implement tax and energy sector reforms and give full autonomy to the State Bank of Pakistan.