About a 1.3 million acres of farm land is under water -- about eight times the size of Singapore. 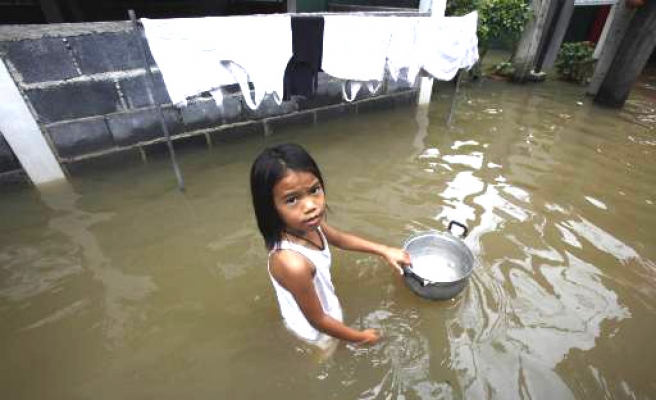 Monsoon rains, floods and mudslides in Thailand have killed at least 98 people since July, authorities said on Friday, posing a test for the new government of Prime Minister Yingluck Shinawatra.

Flooding in 29 of Thailand's 76 provinces has destroyed or damaged more then 300,000 homes, authorities said, briefly sinking parts of resort city Pattaya in waist-high water and causing the evacuation of 79 elephants from a farm in Ayutthaya.

About a 1.3 million acres of farm land is under water -- about eight times the size of Singapore.

"Twenty-one provinces in north and northeast have been warned of flash flooding and landslides," the Department of Disaster Prevention and Mitigation said in a statement on Friday.

The floods began after tropical storm Nock-ten battered Southeast Asia in late July, killing more than 50 people in the Philippines before bearing down on Vietnam and Thailand.

Many farms have expanded plantation acreage in recent years to offset slight falls in production from flood damage. Thailand was expected to produce 25.1 million tonnes of paddy this year, up from 24 million tonnes the previous year.

By next week, flood waters could reach parts of Bangkok, which sits only two metres (6 ft 7 inches) above sea level, causing the capital's Chao Phraya river to overflow onto roads in some areas, although authorities have reinforced its banks to prevent serious flooding.

Remi Huet, a 30-year-old French tourist, was killed by flashfloods while bicycling in a national park in Prachin Buri province, 135 km (218 miles) northeast of Bangkok. His body was found a km (0.62 mile) from the cycling track on Sunday .