Casualty figures are expected to rise, Iranian officials said, as some of the injured were in critical condition while others were still trapped under the rubble inaccessible to rescue workers. 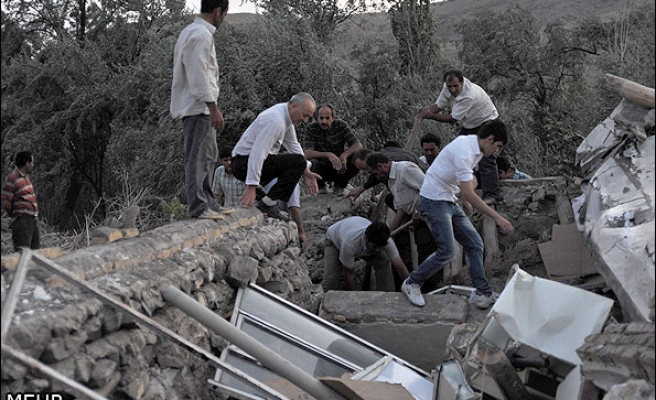 Two powerful earthquakes killed 250 people and injured around 1,800 in northwest Iran, where rescue workers frantically combed the rubble of dozens of villages throughout the night and into Sunday as medical staff desperately tried to save lives.

Thousands huddled in makeshift camps or slept in the streets after Saturday's quakes in fear of more aftershocks, 40 of which have already struck.

Casualty figures are expected to rise, Iranian officials said, as some of the injured were in critical condition while others were still trapped under the rubble inaccessible to rescue workers hampered by darkness in the first hours after the quakes.

Six villages were destroyed and about 60 sustained more than 50 percent damage, Iranian media reported. A bout 110 villages were damaged in the quakes, Deputy Interior Minister Hassan Gha dami was quoted by Fars as saying.

Photographs posted on Iranian news websites showed numerous bodies, including children, lying on the floor of a white-tiled morgue in the town of Ahar and medical staff treating the injured in the open air as dusk fell.

Other images showed massive destruction wrought by the earthquakes and rescue workers digging people out of the rubble, some alive, many dead.

Iran is situated on major fault lines and has suffered several devastating earthquakes in recent years, including a 6.6 magnitude quake in 2003 that reduced the historic southeastern city of Bam to dust and killed more than 25,000 people.

Ghadami said 2 5 0 people had been killed and about 1, 8 00 injured, F ars reported. A local emergency official told the Iranian Students' News Agency (ISNA) that about 2,000 people were believed to be injured.

The second quake struck near the town of Varzaghan. "The quake was so intense that people poured into the streets through fear," said the news agency Fars.

Hundreds of people were rescued from under the rubble of collapsed buildings but nightfall severely disrupted emergency efforts.

"Unfortunately there are still a number of people trapped in the rubble but finding them is very difficult because of the darkness," Fars quoted the national emergency head Gholam Reza Masoumi as saying.

IRNA quoted Bahram Samadirad, a provincial official from the coroner's office, as saying: "Since some people are in a critical condition ... it is possible for the number of casualties to rise."

Interior Minister Mostafa Mohammad-Najjar has arrived in the area and was holding meetings with local officials meant to coordinate the emergency response, ISNA reported.

The hospital in Varzaghan, staffed by just two doctors and with shortages of medical supplies and food, was struggling to cope with about 500 injured, the Mehr news agency reported.

The earthquakes struck in East Azerbaijan province, a mountainous region that neighbours Azerbaijan and Armenia to the north and is predominantly populated by ethnic Azeris - a significant minority in Iran.

Its capital, Tabriz, is a major city and trading hub far from Iran's oil-producing areas and known nuclear facilities. Buildings there are substantially built and the Iranian Students' News Agency said nobody in the city had been killed or hurt.

Homes and business premises in Iranian villages, however, are often made of concrete blocks or mud brick that can crumble and collapse in a strong quake.

Hospitals in Tabriz took in many of the injured from the surrounding villages, and city residents left their homes and crowded the streets following the two quakes, residents said.

"We were in our home on the sixth floor when the earthquake struck," said Massood, a Tabriz resident who spoke to Reuters by phone. "It took a very long time. For about 40, 45 seconds everything was shaking and we were ready for the building to collapse, but nothing happened."

His family was leaving their home and was in the stairwell when the second earthquake struck, Massood said. Ambulances were crowding a major Tabriz hospital from about midnight onward, he said, and a sizeable aftershock around 3 a.m. l o cal time brought people out of their homes again.

"I was just on the phone talking to my mother when she said, 'There's just been an earthquake', then the line was cut," one woman from Tabriz, who lives outside Iran, wrote on Facebook.

Red Crescent official Mahmoud Mozafar was quoted by Mehr news agency as saying about 16,000 people in the quake-hit area had been given emergency shelter.

Officials said distribution of emergency shelter was ongoing and a field hospital was being set up in Varzaghan on Sunday to treat the injured.

Fars quoted Iranian lawmaker Abbas Falahi as saying he believed rescue workers had not yet been able to reach between 10 and 20 villages. Falahi said people in the region were in need of bread, tents and drinking water.

A local provincial official warned of more aftershocks over the next 48 hours and urged people in the area to stay outdoors.

The Turkish Red Crescent said it was sending a truck full of emergency supplies to the border. Turkey's Foreign Ministry said it had informed Iran it was ready to help.