Spectators tried to hold up parts of the collapsed stage that fell into the standing area below to help anyone who might be trapped, witnesses said. 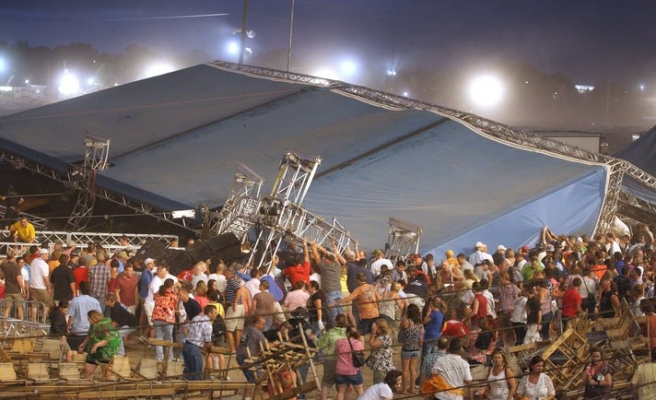 Four people were killed and at least 40 people were hurt when a stage collapsed in windy weather at the Indiana State Fair on Saturday, just minutes before country music duo Sugarland was set to perform.

The Indianapolis Department of Public Safety said in a Twitter message: "4 fatalities and 40 transported to local hospitals. Unknown number in critical condition."

An amateur video posted on YouTube showed a heavy gust of wind blowing down the stage rigging. People in the crowd can be heard screaming.

Witnesses said the weather was windy and it had started to rain.

"Tragedy at fair concert. Entire stage collapses on track," David Lindquist, music critic for the Indianapolis Star, said in a Twitter message. "Perhaps a dozen injured people have been removed from track on stretcher-type boards."

Spectators tried to hold up parts of the collapsed stage that fell into the standing area below to help anyone who might be trapped, witnesses said.

Sugarland sent a Twitter message about the incident, saying: "We are all right. We are praying for our fans, and the people of Indianapolis. We hope you'll join us. They need your strength."

The Hoosier Lottery Grandstand at the state fairgrounds can seat more than 15,000 people. Underneath the stage are dressing rooms and other facilities.