Devastating floods in Pakistan have forces thousands of people from their homes. 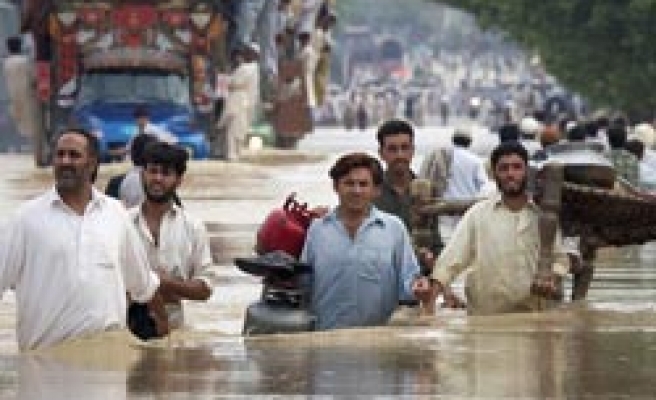 Heavy monsoon rains have triggered the worst floods in decades in Pakistan's northwest, killing more than 430 people as the United Nations says 1 million people have been effected.

The devastating floods have forced thousands from their homes as authorities struggle to reach stranded villagers.

"According to initial reports received from all districts, 408 people have so far been killed" since Wednesday, Information Minister Mian Iftikhar Hussain told reporters in the provincial capital of Peshawar.

"We fear the death toll will rise once the water recedes. We are facing the worst disaster in the history of our province."

The towns of Nowshera and Charsadda and the northwestern valley of Swat were the worst hit where gushing flood waters washed away houses and hotels around the banks of swollen rivers.

"Half of Nowshera is already under water," said Imran Khan, whose ancestral home is beside the river in the garrison town, about 100 km (60 miles) northwest of Islamabad.

"The military hospital, and many other buildings in the cantonment area, are also half under water. ... Some trucks of military rescue convoys are stuck on the road," he said.

But the U.N. Office for the Coordination of Humanitarian Affairs says the cost of damage from floods was not clear.

Government official Lutfur Rehman said Saturday floodwaters were receding in the northwest, but rescuers were facing problems reaching affected people because of damage caused to roads and bridges.

The Pakistan army, which is leading the rescue and relief activity, said it had evacuated about 14,250 people from the flooded regions so far.

About 50 tonnes of rations had been airlifted into affected areas, the army said in a statement.

Khyber Pakhtunkhwa has seen some of the fiercest fighting in Pakistan's war against Taliban insurgents, with Swat and regions nearby especially hard hit. Militants came within 60 miles of the capital last year, prompting a major military offensive.

The province has received more than 312 mm rains in the past three days -- the highest figure recorded in the last 35 years -- chief meteorologist Ghulam Rasul said.

The monsoon season in Pakistan lasts until the first week of September. Weather officials are forecasting continued heavy rains for the next 10 days.

About 70 people were killed in flash floods in the southwestern Baluchistan province last week, which also uprooted nearly 100,000 people.

Minister Hussain appealed for help from the international community and said the assistance must reach the province now, or the provincial government would be forced to cut employees' wages and development work to meet losses.

The flooding capped an already deadly week in Pakistan. A passenger jet slammed into hills overlooking Islamabad killing all 152 people on board Wednesday.