At least 12 people died and 15 were seriously injured after an explosion at an abandoned plastics and chemicals factory in the eastern Chinese city. 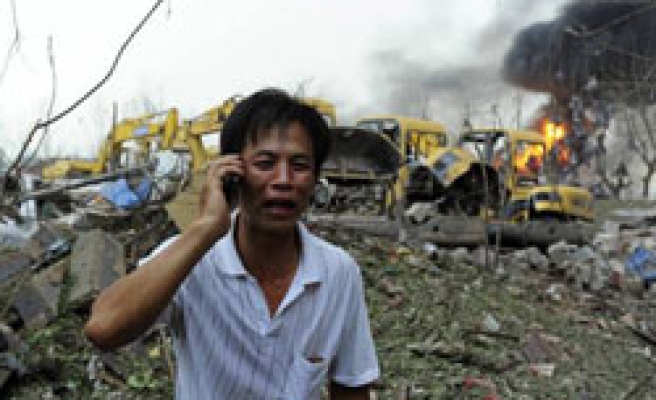 At least 12 people died and 15 were seriously injured on Wednesday after an explosion at an abandoned plastics and chemicals factory in the eastern Chinese city of Nanjing, state television said.

The blast flattened buildings within a 100-metre radius, strewing rubble over the ground, and struck a passing bus, on which many passengers were injured.

Pictures showed flames leaping from the site and towering over a nearby three-storey building, with a column of dark smoke rising into the sky.

Windows shattered in buildings up to 3 km (1.9 miles) from the scene of the accident.

"When it happened, I was just there in my shop. There was a loud bang and I saw that the fire was so big," said witness Lao Yan, 47. "When the explosion happened, everything fell and the door fell on my head and my clothes were all torn."

Others said they were lucky to be alive.

"If I had come out later by just one or two minutes from the lane, it might be that I will not be here alive," said Ye Kai, 25, speaking from hospital where he was being treated for minor injuries.

"When I drove out of the lane, I smelt something that I could not identify. When I just drove across the road and got out of the car, the explosion happened. The car was damaged, the front windscreen was shattered."

Rescue workers have bought the fire under control and are combing debris, looking for the injured or dead, state news agency Xinhua said.

Xinhua said an initial investigation showed the explosion, in the city's northern Qixia district, was caused by a gas leak.

Previously, an official from state-owned oil giant Sinopec said the facility was a local liquefied petroleum gas plant. A nearby Sinopec petrol station was unaffected, he said.