Mudslides engulfed a town in northwest China on Sunday as rescue teams dug out crushed homes and sought to blast away debris clogging a river. 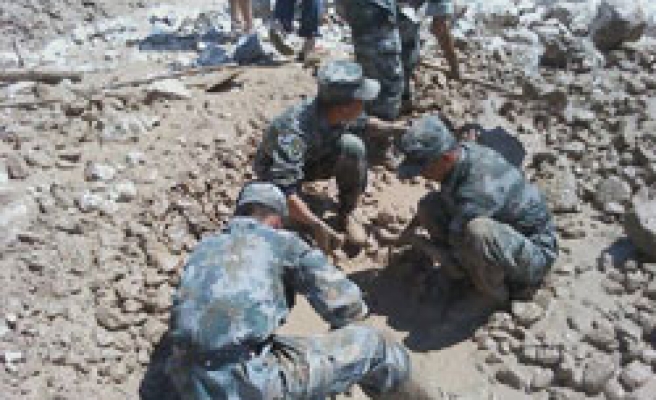 Mudslides engulfed a town in northwest China on Sunday, killing at least 127 people and leaving nearly 2,000 residents missing as rescue teams dug out crushed homes and sought to blast away debris clogging a river.

Runoff from the downpour built up behind a landslide on the Bailong River, which courses through the main town in Zhouqu.

The clogged river in the narrow valley holding the town triggered flooding and mudslides that struck after midnight, smashed a small hydro station, and left at least 127 dead, according to Xinhua.

The disaster follows flooding in Pakistan which has killed more than 1,600 people and in the Indian state of Jammu and Kashmir. Flash floods have killed at least 132 people in the Himalayan region of Ladakh.

China's death toll could rise sharply as Premier Wen Jiabao headed to the scene. Nearly 2,000 people were missing, according to Xinhua. One village in the county was "buried" in the devastation, said Xinhua.

"It's very hard to locate the people washed away by floods. It's hard to say what their chances of survival are," He Youxin, an officer organising rescue efforts in Zhouqu, told Xinhua.

Rescue officials told Chinese television the mud and wreckage made it impossible to use heavy machinery.

"Many single-storey homes have been wiped out and now we're waiting to see how many people got out," one resident of Zhouqu, a merchant called Han Jiangping, told Reuters by phone.

"We've had landslides before, but never anything this bad. People are trying to find their families and waiting for more rescuers."

At one point, the flooding covered about half of the Zhouqu county seat, which has about 40,000 residents. The flood water reached up to three storeys high on some buildings.

About 2,800 troops and 100 medical workers were sent to help, Xinhua said.

"Now the sludge has become the biggest problem to rescue operations. It's too thick to walk or drive through," said the head of the county, Diemujiangteng, according to Xinhua.

China's ruling Communist Party has become adept at showing its strength by mobilising troops, aid and propaganda in the face of natural calamities, such as a massive earthquake in 2008. Chinese President Hu Jintao and Premier Wen told officials to "spare no efforts to save lives", said Xinhua.

More than 1,400 people have been killed this year in floods that have devastated areas of central and southern China, according to the national disaster relief authority.

Pictures from Zhouqu showed mud and water covering town streets, motor vehicles being swept downstream and troops frantically digging through debris to hunt for victims, including a boy pulled from a shattered house. Xinhua said the mud dumped on the streets was up to two metres deep.

"There was thunder and huge rain, and then the landslides started coming down," said a resident of Zhouqu contacted by Reuters. He gave only his surname, Bai.

"That was about midnight, so some people must have been in their homes, asleep and didn't know what was happening."

Many residents of Gannan are ethnic Tibetan herders and farmers and the rough terrain may hamper rescue efforts. Zhouqu County has 135,000 residents, about a third of them ethnic Tibetans, according to the county government.

Troops prepared explosives to blast away some of the mud and rocks silting up the river, creating a backlog of water 5 kilometres (2 miles) long, television news said. Chinese Premier Wen, a geologist, told officials to develop a plan as soon as possible to unblock the river safely.

About 19,000 people living in two town below the blockage were moved away, the reports said.

The Gannan meteorological bureau forecast heavy rains on the Bailong River from Tuesday.