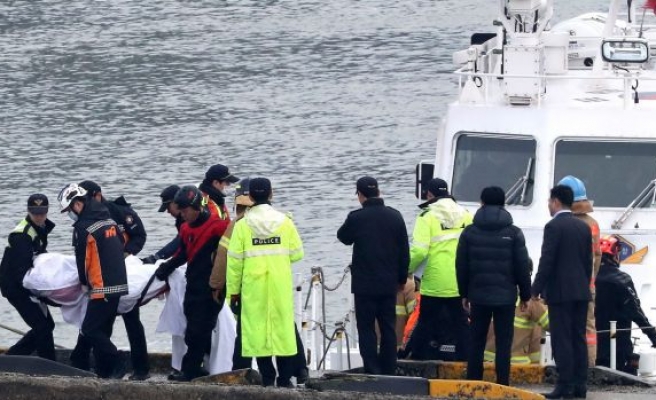 South Korean search crews on Tuesday found the bodies of two missing victims of a maritime tragedy off the country’s west coast two days earlier.
Their discovery brought the death toll to 15 while seven people survived Sunday’s incident when their 10-ton chartered fishing boat collided with a 336-ton tanker.

The captain of the fishing vessel was identified Tuesday morning by his son after being found on a mudflat, according to local news agency Yonhap.

The coast guard then confirmed that a rescue helicopter had spotted the other missing angler.

Rescue ships had been joined by the military in scouring the area near Incheon where the collision took place.

Investigators have been questioning the captain and a crew member of the tanker involved in the collision. They face charges of professional negligence resulting in death.

South Korean President Moon Jae-in has demanded improved safety measures as the incident has highlighted concerns about the safety of recreational maritime tours.

The nation remains particularly sensitive to public safety issues in the wake of the 2014 Sewol ferry disaster that claimed more than 300 lives off the country’s southwestern coastline.
Last Mod: 05 Aralık 2017, 10:11
Add Comment