Despair prevails on Crimea on anniversary of Russian annexation

Following the annexation by Russia, many Crimean Tatars have been feeling insecure due to the possible return to Stalinist repression despite official promises to respect their rights and freedoms. 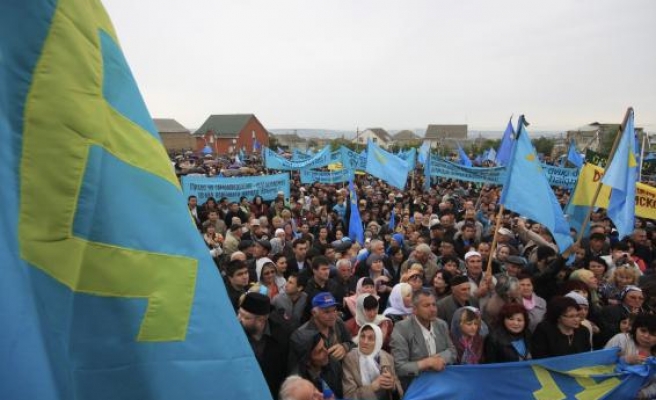 A Muslim community that comprises about 13 percent of the province's population, the Crimean Tatars were opposed to Moscow's takeover from Ukraine. They boycotted en masse the hastily-organised March referendum in which the pro-Russian majority voted to join Russia.

Native to the peninsula, the Crimean Tatars were brutally deported to Central Asia in 1944 by Joseph Stalin for alleged collaboration with the invading Nazis during World War II.

The return of Russian rule has triggered anxiety.

"After the Russian authorities came to Crimea, things that had never happened in Crimea before started to happen," Mejlis member Ilmi Umerov told to the AFP, a longtime head of the Bakhchysaray district who quit when it moved under Moscow's control.

"These actions are meant to teach us loyalty to these authorities."

Umerov said four young men remain missing after suspected kidnappings and that four others who disappeared were later found dead.

"In every Crimean Tatar family there is a feeling of fear and lack of security while living in our own homeland," says Elvira Ablyalimova, listing "disappearances, sadistic murders... attacks on media, and arrests on trumped-up charges."

Her own husband, Akhtem Chiygoz, deputy head of the Tatar assembly, the Mejlis, was arrested for allegedly organising riots, inciting violence and committing involuntary manslaughter. These charges are only part of a sweeping probe that has already seen over 150 people questioned and saw Ablyalimova's family home raided in January.

The probe against Chiygoz stems from a rally the Mejlis called on February 26 last year near the Crimean parliament, just hours before heavily armed soldiers in unmarked uniforms occupied the building, raised the Russian flag and forced the lawmakers to vote for installing a new pro-Russian government.

Clashes broke out when pro-Russian activists turned up at the same location. Footage shows two groups facing off, ignoring calls for order, yelling "Referendum!" or "Crimea is not Russia!" In the ensuing disorder, two people died.

However, the probe only targets Crimean Tatars and applies Russian law to events that preceded Russia's jurisdiction, Ablyalimova said. "It was a different reality, a different state," she said incredulously, calling the case illegal.

The authorities say that arrests and searches are well-founded and directed against political troublemakers rather than Crimean Tatars as a whole.

The office of the Mejlis has been sealed off and key members banned from entering Crimea, making Skype the only means to discuss important issues, said Umerov. The Tatar media also faces difficult times.

"Most of us are shocked by what happened in Crimea. Those who could not get over the shock have left," said Liliya Budzhurova, deputy director of the Crimean Tatar television channel ATR and also a reporter for AFP.

Those who stayed "made a difficult choice", she said, to live in what is essentially a hostile environment in which the channel must employ self-censorship if it wants to survive.

Last month ATR's premises were stormed by 50 Russian police who searched every workstation and employee and seized footage of the February 26 events, she said, calling the force used during the raid "intimidation".

The channel was openly pro-Ukrainian before, but recent Russian anti-extremism and separatism legislation has forced it to cut potentially compromising terminology from coverage, she said. They even avoid mentioning that Crimea was until a year ago part of Ukraine.

She described the process as having "scissors inside our heads".

"Occupation, annexation: these terms have been fully excluded from our vocabulary," she said.

The prospects for ATR look dismal. The new governor of Crimea, Sergei Aksyonov, said this month that the peninsula does not need "enemy media."

But closing down the world's only Crimean Tatar-language channel would be a global scandal and go against everyone's interests, Budzhurova said.

"For half a century we didn't have the right to speak, listen and read in our national language and to rob us of that right would be a repeat tragedy," she said, vowing to stay and work in Crimea no matter what.