The stench of rotting carcasses of cattle was almost unbearable for people in some parts of Srinagar, a city of more than a million people. 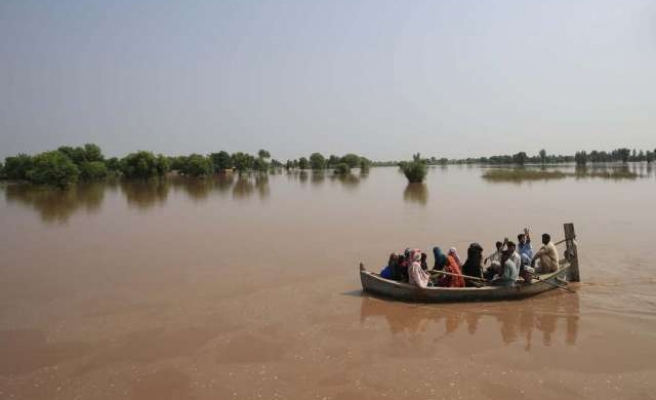 Indian emergency workers battled on Monday to prevent waterborne diseases from spreading, as fetid water swilled around the Kashmir valley more than a week after the region's worst flooding in more than a century.

More than 75,000 people were still stuck in partly submerged homes in occupied Kashmir's main city of Srinagar, where roads have been transformed into stagnant canals strewn with sewage, wreckage and dead livestock.

"Floating carcasses have become a big source of worry with most houses still waterlogged. We are struggling to get in touch with government health officials," said Abul Syed Rahman, who owns three hotels in Kashmir.

Both the Indian and Pakistani sides of the disputed Himalayan region have seen extensive flooding this month with Srinagar particularly hard hit.

Flooding and landslides have killed hundreds of people and tens of thousands are homeless. The cost of damage in India-occupied Kashmir may run into billions of dollars.

The Indian federal government said it feared a rise in the number of people getting sick from dirty water and had delivered 25 water filtration plants with the capacity to filter 400,000 litres a day, and 13 tonnes of water purification tablets.

More than 200,000 people have been rescued in the past eight days and communication networks partially restored.

"Finally, we are seeing some government officials trying to restore basic services. In the last eight days we had no help from the government," said Alam Wani, a Srinagar bank official.

Wani's two-storey house has been partially submerged since the onset of torrential rain, forcing him to move into a mosque with his family of eight.

Hospitals were themselves hit by flooding when the swollen Jhelum river burst its banks, with staff scattered around the city and unable to get to work.

Doctors were running out of medicines and surgical equipment as they struggled to provide emergency services in makeshift medical centres.

"Our medical headquarters is totally under water. It is very difficult to deal with critical cases. Thousands of patients need antibiotics and diabetics require insulin," Dr Hina Rahman told Reuters.

Doctors warned that getting waterlogged hospitals working again would be tough because basement store rooms were flooded and expensive equipment like magnetic resonance imaging (MRI) and X-ray machines ruined.

People have been coming in with respiratory infections and gastric problems, said Zubair Khwaja, a doctor who normally works at Sher-i-Kashmir Institute of Medical Sciences but has been volunteering with the Muslim Students Board, a group that runs a religious school in Srinagar.

Municipal authorities said they had started collecting rubbish from pools of stagnant water and the fire department was using fire engines to pump out waterlogged areas.

The stench of rotting carcasses of cattle was almost unbearable for people in some parts of Srinagar, a city of more than a million people.

With acres of stagnant water remaining in the city, Khwaja warned that the risk of waterborne diseases would increase. "You can smell the air," he said.