UN has warned that up to 3.5 million children could be in danger of contracting deadly diseases carried through contaminated water and insects in a crisis. 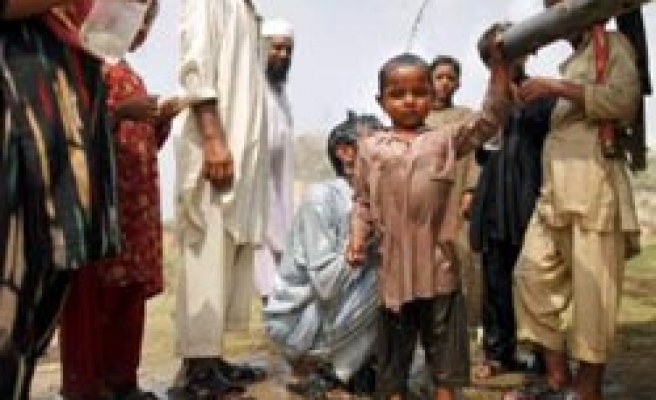 As Pakistan's floodwaters rushed into Bakhmina Said's mud-brick home, she grabbed medical records of her daughter's heart condition, put them in a metal trunk and headed to high ground.

Eighteen days later, one-year-old Naeema sleeps on a mat in sweltering heat at a fly-infested camp, with no fan, no chance of seeing a cardiologist anytime soon and at risk of catching other potentially fatal diseases in cramped, un-hygienic conditions.

"Who will treat her? The doctors said she has a hole in the wall of her heart," said Said, also worried because one of her six other children has fallen ill after the floods.

At a camp in northwest Pakistan set up by a U.K.-registered Islamic charity, doctors and workers scramble to protect children -- many of whom don't grasp the magnitude of the disaster but are the most vulnerable.

Some are brought here for daily treatment, others languish with hundreds of others displaced by the worst floods in Pakistan's history in a college on the camp's grounds.

It's a scene that's being played out across affected areas. Pakistan's worst floods in decades have killed up to 1,600 people and made two million homeless. he United Nations has reported the first case of cholera, but only a small fraction of the funds needed for initial relief has arrived.

So far the biggest problem at the camp is scabies, a skin infection that is caused by mites which burrow and produce pimple-like irritations. One of the biggest potential killers -- diarrhoea -- is a constant worry.

As parents contemplate how the family can etch out a living, children watch out for younger siblings.

Nine-year-old Sabah Gul carries her one-year-old brother over her shoulder as she attends a clinic with her younger sister. Doctors say the brother has not caught any diseases but that could change soon because he is getting weaker by the day.

Beads of sweat ran down Gul's forehead. She looked exhausted yet managed to concentrate as a physician examined her sister.

"My mother is here but I am taking care of my sister and brother. My father is a labourer. He is out looking for work," said Gul, her face surrounded by a veil.

The charity has managed to secure clean water for people in the camp. But food supplies are limited to rice. Sometimes Pakistanis who have been spared by the floods donate food.

One floor above the room where Naeema lives, other families sit in a classroom and wonder if they can ever recover.

A little boy uses a knife to cut a cardboard box and tries to attach a wire. He says he is trying to make a car. Above him on a chalkboard are complex mathematical formulas.

It's not just the young who need help.

Seventy-year-old Taja Abdul Sattar walked for one and a half hours to the camp to get treatment for scabies.

Asked about the future of Pakistan after the floods, she said: "I just want a tent."