Donkeys come to the rescue in Pakistan floods-PHOTO

Officials say the donkeys have hauled over 20 tonnes of supplies along the route to Shahpur since Aug. 3. 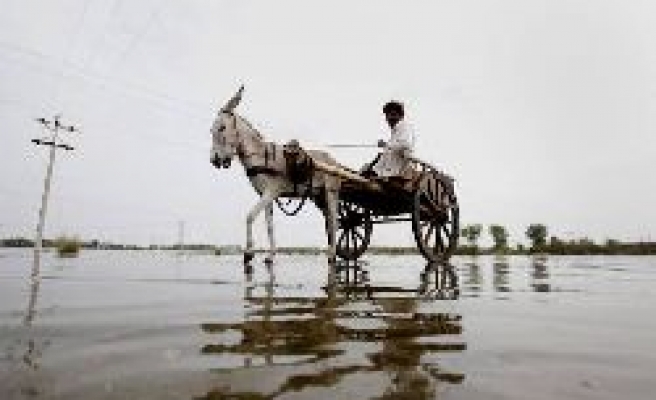 Millions of dollars may have been donated for Pakistan's flood victims, but on the ground authorities are having to use donkeys to slowly transport supplies to cut off mountain villages.

Reaching remote villages tucked between mountains is one of the most daunting challenges. In Shahpur valley, where Koza Sirai is located, some 150,000 people are in urgent need of food and medical supplies, officials say.

With an area roughly the size of Italy affected by floods, government and foreign aid has been slow in coming and the United Nations has warned of a second wave of deaths among the sick and hungry if help does not arrive.

As urgent appeals for international aid are made, policemen guide 30 donkeys strapped with flour, rice, cooking oil and sugar along narrow, muddy tracks and mountain terrain to villages.

Pakistan's powerful military, which has raised its profile with rescue and relief efforts in the flood catastrophe, is overseeing such operations, which take four hours each way.

Swollen by torrential monsoon rains, major rivers have flooded Pakistan's mountain valleys and fertile plains, killing up to 1,600 people and leaving two million homeless.
The villages, part of the greater Swat valley, were cut off for four days after the floods washed away houses, markets and crops.

Officials say the donkeys have hauled over 20 tonnes of supplies along the route to Shahpur since Aug. 3.

Before the floods, the government promised to pour hundreds of millions of dollars into Swat to rebuild infrastructure, schools and hospitals damaged in the war against Taliban insurgents there, in order to win over the public.

Now the economic damages of the flood disaster may force the government to hold back or cut into that strategic spending.

Only a quarter of the $459 million aid needed for initial relief has arrived, according to the United Nations.

Getting food distributed by donkeys is in some ways a luxury because the programme is so small. Hundreds of thousands of villagers make the journey on their own. The sick and wounded are carried on people's shoulders on a charpoy, a frame strung with light ropes.

Military officials say many villages are still inaccessible. Even beasts of burden struggle to get through one of the biggest disasters in Pakistan's history. They move along the edge of sheer mud cliffs created by landslides in blistering heat.

"Two of my donkeys got injured as they fell on a narrow track," said donkey owner Munawarullah Khan. In a nearby river bed, several mules turned over and rubbed their backs on wet sand. "They are exhausted," he said.