There has been no rain in the Thar desert for the last two years. 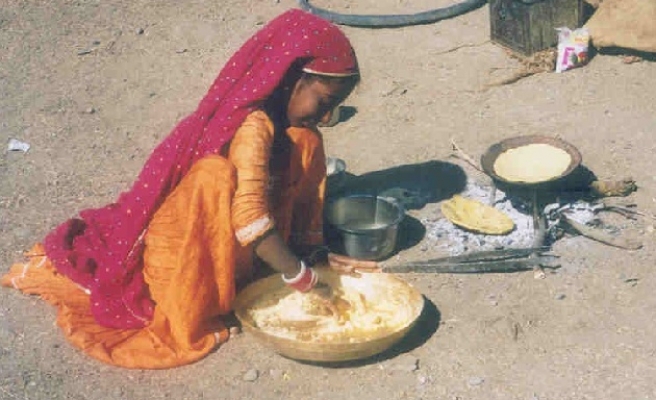 Some 121 children have been killed in the last three years in areas bordering Pakistan’s southern Thar desert as famine forced thousands to migrate for food, officials and local residents said.

At least 32 malnourished children have died in February, and the first week of March in different parts of Tharparkar district as a severe drought affected around 175,000 families in the desert region.

“People have been living in poor conditions due to an acute shortage of food and water in far-flung areas of the Tharparkar district, where according to our information, 150 children have so far died due to malnutrition,” Haleem Adil Shaikh, the Chief of Pakistan Relief Foundation, an NGO working in the region told Anadolu Agency.

“We have repeatedly requested the authorities concerned to declare the area calamity-hit, and take immediate action to cope with food and water shortage last December, but to no avail,” Shaikh said. "Some 40 children died in November and December of 2013," he added.

Chachro, a small town in the district of Tharparkar located on the edge of the Thar desert is the worst affected area, where persistent drought has forced hundreds of families to migrate to other areas for food and water in the last three years. Hundreds of animals, including Thar’s renowned peacocks have also died in the last few months due to drought.

Dr Abdul Jalil Bhurgari, a doctor in the area’s only major public hospital located in the district headquarters of Mithi informed reporters that 121 children died in last three months due to malnutrition in different parts of the district.

Dr Jalil explained how people travelled with the sick from far-flung areas for four or five days on foot in the desert to reach the Mithi hospital, and said “Various children were brought to the hospital dead. There is no road connection between several remote areas and the district headquarters of Mithi.“

"An acute shortage of food, and water compounded by severe cold have already badly affected the mothers’ capability to feed (their children)”, Dr Jalil said.

The Chief Minister of Southern Sindh province, Syed Qaim Ali Shah, critical of government negligence and inaction to handle the situation, has ordered the authorities to immediately provide 10,000 tonnes of wheat to the affected people.

Insufficient facilities at the district headquarters hospital in Mithi along with a lack of transportation to move patients to other hospitals has been revealed. “The concerned authorities did not discharge their responsibilities in the required manner. The affected children need to be moved to big hospitals in adjoining districts”, Shah said at a press conference on Friday. Various officials have been suspended, and an inquiry has been initiated, he added.

Spanning over 200,000 square kilometers, Thar is the seventh largest desert in the world that forms a natural boundary running along the border between Pakistan and India.The main occupations of the locals are agriculture and animal husbandry, which totally depend on rain.